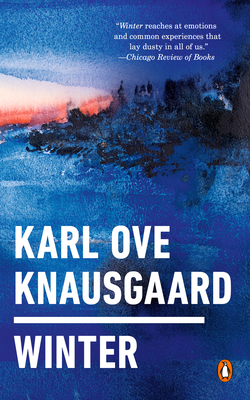 By Karl Ove Knausgaard
$18.00
Unavailable, Out of Stock, or Out of Print

The second volume in his autobiographical quartet based on the seasons, Winter is an achingly beautiful collection of daily meditations and letters addressed directly to Knaugsaard's unborn daughter

In Winter, we rejoin the great Karl Ove Knausgaard as he waits for the birth of his daughter. In preparation for her arrival, he takes stock of the world, seeing it as if for the first time. In his inimitably sensitive style, he writes about the moon, water, messiness, owls, birthdays--to name just a handful of his subjects. These oh-so-familiar objects and ideas he fills with new meaning, taking nothing for granted or as given. New life is on the horizon, but the earth is also in hibernation, waiting for the warmer weather to return, and so a contradictory melancholy inflects his gaze.

Startling, compassionate, and exquisitely beautiful, Knausgaard's writing is like nothing else. Somehow, he shows the world as it really is, at once mundane and sublime.

Karl Ove Knausgaard’s first novel, Out of the World, was the first ever debut novel to win the Norwegian Critics’ Prize and his second, A Time for Everything, was widely acclaimed. The My Struggle cycle of novels has been heralded as a masterpiece wherever it has appeared, and the first volume was awarded the prestigious Brage Prize.

“The author casts the world in a holy glow of surprise and compassion… A winningly interior journey into the most interior of seasons.” —Kirkus Reviews, starred

“One of the most satisfying elements of [Knausgaard’s] writing is the rendering of what it is like to be alive, to be a person in the world, whether alone or among people, to walk around as thoughts develop, or to hatch plans with others and participate in activities as a separate being and as part of a whole. His new series, a four-volume autobiography based on the autumn and winter seasons, offers a glimpse at how these effects are accomplished.” — David Varno, The Brooklyn Rail

“I’d have to say that he’s awakened a tempest in me. . . Knausgaard wrote these essays, he said in an interview, “for fun.” And they are fun ... and stunning and glorious. . . it’s the seemingly endless stirring of his thoughts about the wide world out there that helps to stir ours.” — Bob Blaisdell, The Christian Science Monitor

“The few winter-specific entries offer some lovely evocations of the snowbound Scandinavian landscape that will resonate with Knausgaard’s latitudinal neighbours. Even when discussing other subjects, though, the essays as a whole reflect the season’s mood of quiet introversion. Most relate to Knausgaard’s daily surroundings and follow a similar arc, beginning with a borderline-irritatingly simple statement (“Pipes transport flowing liquids” or “A chair is for sitting on”) before veering off on tangents that are by turns philosophic, funny, and personal. . . I loved the weird helter-skelter of its ramblings. Autumn and Winter don’t quite present things “anew,” but they give their subjects a uniquely Knausgaardian cast; the fun is in seeing where we end up, Plinko-style, from where we began. “ — The Toronto Star

“Every child should be as fortunate as Knausgaard's daughter will be some day to have stories like these to usher them into the world. But since few will be that lucky, they and their parents might want to savor WINTER and its seasonal companions instead.” – Bookreporter.com

“Unlike the long passages in My Struggle that ruminated on a single idea, the essays in this quartet each last only a handful of pages. This lightness of touch may surprise his longtime fans, especially considering the weight of some of the topics he covers in ”Setting Limits, “Sexual Desire,” “Atoms,” and “The Brain.” But his ability to weave questions, reflections, and conclusions into such small spaces is often beautiful… When reading these essays, I sometimes paused to ask if Knausgaard was pulling the wool over my eyes with the beauty his prose alone. But no, he doesn’t….Winter reaches at emotions and common experiences that lay dusty in all of us.” — Chicago Review of Books