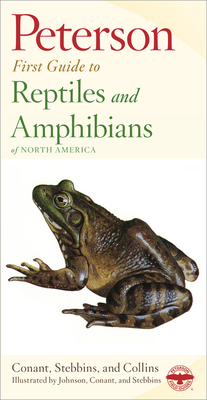 From mudpuppies to rattlesnakes, this fascinating guide for young nature lovers describes the habits and habitats of these secretive and sometimes bizarre animals, and includes tips on how to catch and care for frogs, snakes, turtles, lizards, salamanders, and toads.

The late Robert C. Stebbins was professor emeritus of zoology at the University of California, Berkeley, and curator emeritus of the University’s Museum of Vertebrate Zoology. He authored over a dozen books plus numerous scientific papers and produced two documentaries. He was the foremost illustrator of North American amphibians and reptiles. In addition to his work in herpetology and vertebrate natural history, he devoted much of his life to promoting “ecological literacy” in both young people and adults through seminars, workshops, and publications. His last work, Connecting with Nature: A Naturalist's Perspective, summarizes his work in this important area.

ROGER TORY PETERSON, one of the world’s greatest naturalists, received every major award for ornithology, natural science, and conservation as well as numerous honorary degrees, medals, and citations, including the Presidential Medal of Freedom. The Peterson Identification System has been called the greatest invention since binoculars.

ROGER CONANT was an American herpetologist, author, and conservationist.