Somewhere Towards the End: A Memoir (Paperback) 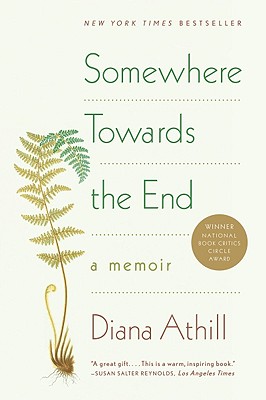 By Diana Athill
$14.95
On Our Shelves Now - Please allow up to 48-hours for Curbside Pickup orders to be processed.

Winner of the 2009 National Book Critics Circle Award in Autobiography and a New York Times bestseller: a prize-winning, critically acclaimed memoir on life and aging —“An honest joy to read” (Alice Munro).

Hailed as “a virtuoso exercise” (Sunday Telegraph), this book reflects candidly, sometimes with great humor, on the condition of being old. Charming readers, writers, and critics alike, the memoir won the Costa Award for Biography and made Athill, now ninety-one, a surprising literary star.

Diana Athill is one of the great editors in British publishing. For more than five decades she edited the likes of V. S. Naipaul and Jean Rhys, for whom she was a confidante and caretaker. As a writer, Athill has made her reputation for the frankness and precisely expressed wisdom of her memoirs. Now in her ninety-first year, "entirely untamed about both old and new conventions" (Literary Review) and freed from any of the inhibitions that even she may have once had, Athill reflects candidly, and sometimes with great humor, on the condition of being old—the losses and occasionally the gains that age brings, the wisdom and fortitude required to face death. Distinguished by "remarkable intelligence...[and the] easy elegance of her prose" (Daily Telegraph), this short, well-crafted book, hailed as "a virtuoso exercise" (Sunday Telegraph) presents an inspiring work for those hoping to flourish in their later years.

After a distinguished career as a book editor, Diana Athill (1917—2019) won the National Book Critics Circle and Costa Biography Awards for her New York Times best-selling memoir Somewhere Towards the End. In January 2009, she was presented with an Order of the British Empire.

Life, not death, is her preoccupation…Reflections on old age, rather than on a long life lived are rare…It is rarer still for a woman to write such a book: so Athill’s candor and economic prose on religion, regrets, and sex are invigorating.
— Emma Jacobs

Jean Rhys said that literature was a lake, and what mattered was to contribute to it, even if only a trickle. She contributed a narrow boiling river. Diana Athill has contributed a cool clear burn.
— Carole Angier

A great gift. . . . This is a warm, inspiring book.
— Susan Salter Reynolds

Bracingly frank…joyful rather than grim… she offers clear-eyed wisdom of the grandma-you-wish-you’d-had variety.

To paraphrase Shakespeare, wisdom is bred in neither the heart nor the head, but in the bones that carry us through the decades. A few very talented artists, like Diana Athill, may persuade their old bones to yield up a glimpse or two of what they’ve learned.
— Laura Miller

There is something terrifically comforting about a nonagenarian writing with clarity, wit and verve about getting old and facing death. . . . [Athill] evokes another grande dame of British letters in her uninhibited lifestyle and no-holds-barred, clarion voice: last year’s Nobel Prize winner, Doris Lessing.
— N. Heller McAlpin

She writes as a person of wide-ranging learning, a generalist, a lover of men and animals and a garden enthusiast, a person intoxicated with life.
— Erica Jong

A spry dispatch on the condition of being elderly.

Unusually appealing. . . . To readers Athill delivers far more than modest pleasure: Her easy-going prose and startling honesty are riveting, for whither she has gone many of us will go as well.
— Michael Dirda

A perfect memoir of old age—candid, detailed, charming, totally lacking in self-pity or sentimentality and above all, beautifully, beautifully written.
— The Costa Award Judges