Into the American Woods: Negotiators on the Pennsylvania Frontier (Paperback) 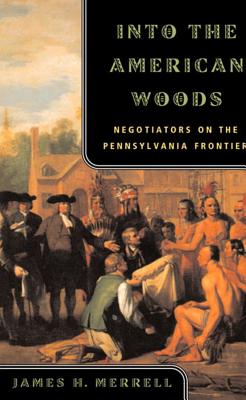 "A stunning achievement. . . . A pathbreaking scholarly work by one of the nation's leading historians of the interaction between Native Americans and European newcomers in early America."--Kirkus Reviews (starred review)

James Merrell's brilliant book is an account of the "go-betweens," the Europeans and Indians who moved between cultures on the Pennsylvania frontier in efforts to maintain the peace. It is also a reflection on the meanings of wilderness to the colonists and natives of the New World. From the Quaker colony's founding in the 1680s into the 1750s, Merrell shows us how the go-betweens survived in the woods, dealing with problems of food, travel, lodging, and safety, and how they sought to bridge the vast cultural gaps between the Europeans and the Indians. The futility of these efforts became clear in the sickening plummet into war after 1750. "A stunningly original and exceedingly well-written account of diplomacy on the edge of the Pennsylvania wilderness."--Publishers Weekly

James H. Merrell is professor of history at Vassar College and the author of (Norton), winner of the Bancroft Prize.