The Globalization Paradox: Democracy and the Future of the World Economy (Hardcover) 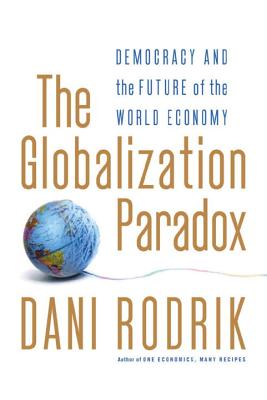 From the mercantile monopolies of seventeenth-century empires to the modern-day authority of the WTO, IMF, and World Bank, the nations of the world have struggled to effectively harness globalization's promise. The economic narratives that underpinned these eras—the gold standard, the Bretton Woods regime, the "Washington Consensus"—brought great success and great failure. In this eloquent challenge to the reigning wisdom on globalization, Dani Rodrik offers a new narrative, one that embraces an ineluctable tension: we cannot simultaneously pursue democracy, national self-determination, and economic globalization. When the social arrangements of democracies inevitably clash with the international demands of globalization, national priorities should take precedence. Combining history with insight, humor with good-natured critique, Rodrik's case for a customizable globalization supported by a light frame of international rules shows the way to a balanced prosperity as we confront today's global challenges in trade, finance, and labor markets.

Dani Rodrik, a prize-winning economist, is the Ford Foundation Professor of International Political Economy at Harvard's John F. Kennedy School of Government. He is the author of The Globalization Paradox and Economics Rules.

Takes on the biggest issue of our time—globalization—and eloquently enlarges the debate about the extent and limits of global cooperation.
— Gordon Brown

Dani Rodrik may be globalization’s most prominent—and most thoughtful—gadfly. In The Globalization Paradox he wonders aloud whether extreme globalization undermines democracy—and vice versa. Read it and you’ll wonder too.

— Alan S. Blinder, former vice-chairman of the Federal Reserve’s Board of Governors

In this powerfully argued book, Dani Rodrik makes the case for country-specific paths to economic development and saner, more sustainable forms of growth. A provocative look at the excesses of hyperglobalization, The Globalization Paradox should be required reading for those who seek to prevent the financial crises and unfair trade practices that feed the backlash against the open markets.

— Nouriel Roubini coauthor of Crisis Economics: A Crash Course in the Future of Finance

Although [Rodrik’s] message is nuanced and rigorous, drawing on history, logic and the latest economic data, he manages to convey it in simple, powerful prose that any reader can follow….a much-needed addendum to [Adam] Smith’s famous formulation.
— Steven Pearlstein - Washington Post

Simply the best recent treatment of the globalization dilemma that I've read, by an economist or anyone else….He gives us nothing less than a general theory of globalization, development, democracy, and the state. The book provides the pleasure of following a thoughtful, critical mind working through a complex puzzle. Rodrik writes in highly friendly and nontechnical prose, blending a wide-ranging knowledge of economic history and politics and a gentle, occasionally incredulous, skepticism about the narrow and distorting lens of his fellow economists.
— Robert Kuttner - The American Prospect

A Big Book, one that may shape a new way of
thinking about the global economy. . . . The style is conversational, but
sweeping and authoritative—professorial in the positive sense. Rodrik is less
of a polemicist . . . preferring to stay inside the tent, but he can pack a
polite punch when necessary.
— Duncan Green, Oxfam International, author of From Poverty to Power

Mr. Rodrik is exactly what the doctor ordered because economics over the past few years has become hyper-politicized (thank you, Paul Krugman) yet never more dismal. Well-written, witty, crafted by an author who doesn’t jump the "Freakonomics" shark, The Globalization Paradox reminds us that economists don’t exist without data, and data comes, ultimately, from the vision and labor of those in the marketplace.