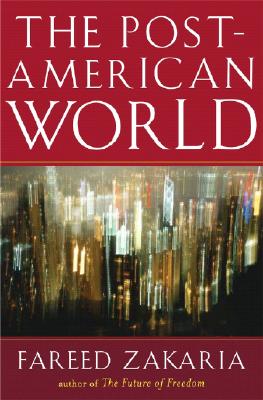 By Fareed Zakaria
$30.00
Unavailable, Out of Stock, or Out of Print

One of our most distinguished thinkers argues that the "rise of the rest" is the great story of our time.

"This is not a book about the decline of America, but rather about the rise of everyone else." So begins Fareed Zakaria's important new work on the era we are now entering. Following on the success of his best-selling The Future of Freedom, Zakaria describes with equal prescience a world in which the United States will no longer dominate the global economy, orchestrate geopolitics, or overwhelm cultures. He sees the "rise of the rest"—the growth of countries like China, India, Brazil, Russia, and many others—as the great story of our time, and one that will reshape the world. The tallest buildings, biggest dams, largest-selling movies, and most advanced cell phones are all being built outside the United States. This economic growth is producing political confidence, national pride, and potentially international problems. How should the United States understand and thrive in this rapidly changing international climate? What does it mean to live in a truly global era? Zakaria answers these questions with his customary lucidity, insight, and imagination.

Fareed Zakaria is the host of CNN’s flagship international affairs show, Fareed Zakaria GPS, as well as weekly columnist for the Washington Post, and the best-selling author of The Post-American World and The Future of Freedom.