The Riddle of Gender: Science, Activism, and Transgender Rights (Paperback) 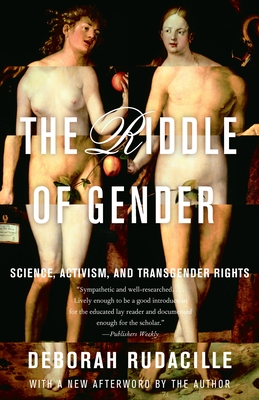 By Deborah Rudacille
$17.00
Unavailable, Out of Stock, or Out of Print

When Deborah Rudacille learned that a close friend had decided to transition from female to male, she felt compelled to understand why.

Coming at the controversial subject of transsexualism from several angles–historical, sociological, psychological, medical–Rudacille discovered that gender variance is anything but new, that changing one’s gender has been met with both acceptance and hostility through the years, and that gender identity, like sexual orientation, appears to be inborn, not learned, though in some people the sex of the body does not match the sex of the brain.

Informed not only by meticulous research, but also by the author’s interviews with prominent members of the transgender community, The Riddle of Gender is a sympathetic and wise look at a sexual revolution that calls into question many of our most deeply held assumptions about what it means to be a man, a woman, and a human being.

Deborah Rudacille is a science writer at Johns Hopkins University. She is the author of The Scalpel and the Butterfly: The Conflict Between Animal Research and Animal Protection. She lives in Baltimore.

“Sympathetic and well-researched. . . . Lively enough to be a good introduction for the educated lay reader and documented enough for the scholar.” –Publishers Weekly

“Amazing! This is the long-awaited fusion of science, criticism, and compassion that scholars of gender–and everybody else–have been waiting for. The Riddle of Gender is meticulous, funny, brilliant, and readable. . . . Not just for those interested in the enigmas of sex and gender, but for those interested in the universal mystery of how we become ourselves.” –Jennifer Finney Boylan, author of She’s Not There: a Life in Two Genders