Canada and Other Matters of Opinion (Paperback) 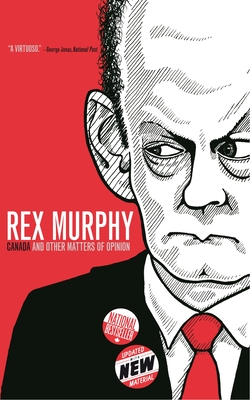 A cornucopia of comment from Canada’s most opinionated man — a man seen, read, and listened to by millions of Canadians each week.

Canada’s most distinctive commentator presents his fearless and thought-provoking views on a head-spinning range of subjects, from Dr. Johnson’s greatness to Bono’s gratingness, from doubts about Obama to utter belief in Don Cherry, from Aleksandr Solzhenitsyn’s outstanding oeuvre to — well, Pamela Anderson.

The topics are as eclectic and wide ranging as the intelligence that put them together. The perspective is thoroughly Canadian, and so are many of the recurring topics and themes: of our domestic politics and our military involvements abroad, of our national identity, of human rights and human decency. You’ll find assessments of the reputations of Paul Martin, Conrad Black, Adrienne Clarkson, and Tim Hortons; tough but affectionate views of Newfoundland — of course — but also from Rex Murphy’s constant travels across Canada.

But all the world is here, in all its glory and folly. The hard-hitting attacks on politicians, celebrities, those who would ban smoking, and anyone who uses the expression “global warming denial” will have you cheering or tearing your hair out, depending. You will be informed, infuriated perhaps, but always fascinated.

Rex Murphy, who needs no introduction, left his outpost home in Newfoundland to attend university at the age of fifteen. Since that time, which includes a spell at Oxford as a Rhodes Scholar, he has been writing and talking. His skills in that area have made him one of Canada’s most-watched and best-read commentators, while his speeches have earned standing ovations from coast to coast. A frequent presence on CBC television and radio, including a regular commentary spot with “Point of View,” Rex writes a weekly column for The Globe and Mail.

"Wit, sarcasm, humour, verbal gymnastics . . . are here, together with some surprising post-scripts added with the benefit of hindsight. . . . Murphy begs — eloquently, of course — to be read."
— The London Free Press