Citizens of Nowhere: From Refugee Camp to Canadian Campus (Paperback) 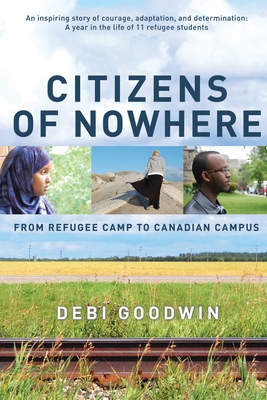 By Debi Goodwin
$17.95
Unavailable, Out of Stock, or Out of Print

An inspiring story of courage, adaptation and determinaton — a year in the life of 11 refugee students entering universities across Canada.

"Most journalists have stories they never forget. This is mine."

When Debi Goodwin travelled to the Dadaab Refugee Camp in 2007 to shoot a documentary on young Somali refugees soon coming to Canada, she did not anticipate the impact the journey would have on her. A year later, in August of 2008, she decided to embark upon a new journey, starting in the overcrowded refugee camps in Kenya, and ending in university campuses across Canada. For a year, she recorded the lives of eleven very lucky refugee students who had received coveted scholarships from Canadian universities, guaranteeing them both a spot in the student body and permanent residency in Canada. We meet them in the overcrowded confines of a Kenyan refugee camp and track them all the way through a year of dramatic and sometimes traumatic adjustments to new life in a foreign country called Canada. This is a snapshot of a refugee's first year in Canada, in particular a snapshot of young men and women lucky and smart enough to earn their passage from refugee camp to Canadian campus.

Debi Goodwin is a documentary producer and a former CBC journalist. While at The National Debi produced documentaries from Latin America, Africa, China and Asia. The documentary "The Lucky Ones," which inspired this book, won the RTNDA's Adrienne Clarkson Award for best network program in 2008. Her work has also received a Gemini nomination and a Chris Award from the Columbus Film Festival.

"Goodwin's account is one of the best I have ever read of the lonely, one-way journey that refugees of the world must endure to capture a part of the better future we take for granted. . . . It is both humbling and uplifting, and not to be
missed."
--Brian Stewart, former senior correspondent with The National