The Making of the October Crisis: Canada's Long Nightmare of Terrorism at the Hands of the FLQ (Paperback) 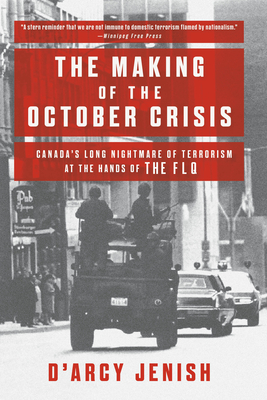 A definitive, mind-changing history of the October Crisis and the events leading up to it, publishing in paperback for the 50th anniversary of the Crisis.

The first bombs exploded in Montreal in the spring of 1963, and over the next seven years there were hundreds more bombings, many bank robberies, six murders and, in October 1970, the kidnappings of a British diplomat and a Quebec cabinet minister. The perpetrators were members of the Front de libération du Québec, dedicated to establishing a sovereign and socialist Quebec. Half a century on, we should have reached some clear understanding of what led to the October Crisis. Instead, too much attention has been paid to the Crisis and not enough to the years preceding it.

Most of those who have written about the FLQ have been ardent nationalists, committed sovereigntists or former terrorists. They tell us that the authorities should have negotiated with the kidnappers and contend that Jean Drapeau's administration and the governments of Robert Bourassa and Pierre Trudeau created the October Crisis by invoking the War Measures Act. Using new research and interviews, D'Arcy Jenish tells the complete story--starting from the spring of 1963. This gripping narrative by a veteran journalist and master storyteller will change forever the way we view this dark chapter in Canadian history.

D'ARCY JENISH is the author of Epic Wanderer: David Thompson and the Mapping of the Canadian West and the award-winning Indian Fall: The Last Great Days of the Plains Cree and the Blackfoot Confederacy. His sports histories include The Montreal Canadiens and The NHL.

"In the current age of terrorism, the merit of this thorough, compelling book is the timely way Jenish reminds us of the scale and intensity of this previous cycle of political violence. . . . A veteran of long-form journalism, Jenish knows how to gather tidbits from disparate sources—police reports, coroner inquests, newspaper clippings—and weave them to recreate narrative scenes, crafting a more appealing read for the general public than other works of the same scope." —The Globe and Mail

"Fascinating, frightening. . . . The Making of the October Crisis is a book that finally gives a complete, well-rounded, factual account of one of the darkest times in modern Canadian history." —Montreal Times

"In these times of severe hate and violence in the United States, D'Arcy Jenish's The Making of the October Crisis . . . is a stern reminder that we are not immune to domestic terrorism flamed by nationalism. . . . Jenish's talent is in being able to tie all the events of this infamous decade together." —Winnipeg Free Press

"[D'Arcy Jenish] has written a brisk, well-researched and richly detailed account of the 'two hundred bombings, dozens of bank robberies, six deaths and two kidnappings' that jangled Quebec's nerves from early 1963 until the fateful fall of 1970. . . . For those who have forgotten much of the detail of the October Crisis and its roots, and for those for whom it's undiscovered territory, Jenish has written a must-read guide." —Canada’s History

"An authoritative work on the period." —The Guardian (UK)

"What I found fascinating about this book was it didn't zero in on the events of that October itself. It started 10 years earlier. The author carefully laid out where the unrest came from. I could relate with some of that unrest as an Indigenous person. I could understand some of the fear that francophones were having around their culture and their language. He carefully laid out how the political idealism and the radical break off that led to this October Crisis, the kidnapping of two government officials and the eventual death of a Canadian minister." —Candy Palmater, CBC.ca