Frontier Justice: The Global Refugee Crisis and What To Do About It (Paperback) 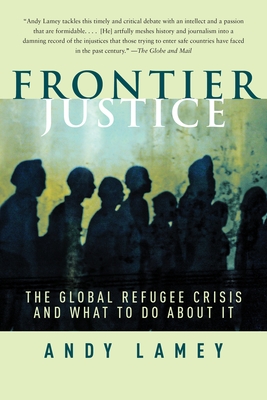 Frontier Justice is a gripping, eye-opening exploration of the world-wide refugee crisis. Combining reporting, history and political philosophy, Andy Lamey sets out to explain the story behind the radical increase in the global number of asylum-seekers, and the effects of North America and Europe’s increasing unwillingness to admit them.

He follows the extraordinary efforts of a set of Yale law students who sued the U.S. government on behalf of a group of refugees imprisoned at Guantánamo Bay; he recounts one refugee family's harrowing journey from Saddam Hussein's Iraq to contemporary Australia via the world's most dangerous ocean crossing; and he explores the fascinating case of Ahmed Ressam, the so-called Millennium bomber who filed a refugee claim in Canada before attempting to blow up the Los Angeles airport. Lamey casts new light on a host of broader subjects, from the reasons why terrorists who pose as refugees have an overwhelming failure rate to the hidden benefits of multiculturalism.

Throughout Lamey's account, he focuses on the rights of people in search of asylum, and how those rights are routinely violated. But Frontier Justice does not merely point out problems. This book offers a bold case for an original solution to the international asylum crisis, one which draws upon Canada's unique approach to asylum-seekers. At the centre of the book is a new blueprint for how the rights of refugees might be enforced, and a vision of human rights that is ultimately optimistic and deeply affirmative.

In exploring one of the most pressing questions of our age, Lamey provides an absorbing and unsettling look at a world in which, as he notes, there are many rights for citizens, few for human beings.

ANDY LAMEY is a Canadian journalist and academic. His writing has appeared in The National Post, Maclean's, The Walrus, and he has produced several radio documentaries for CBC's Ideas programme. He is an Associate Teaching Professor in the Department of Philosophy at the University of California, San Diego.

"Andy Lamey tackles this timely and critical debate with an intellect and a passion that are formidable. Frontier Justice could, quiet possibly, have a lasting effect on policy in Canada and elsewhere."
—The Globe and Mail

"A book that pulses with intellectual curiosity and energy . . . a calm, lucid voice in a a debate often sidetracked by terrorist panic and hypocrisy about human rights."
—The Chronicle Herald (Halifax)

"Despite its grounding in political theory and legal history, this is not a political-science textbook. Lamey introduces the reader to real refugees, offering portraits, for example, of Haitians detained at Guantanamo Bay before and during the Clinton administration. There are even sections where the book becomes a page-turner."
—The Ottawa Citizen

"Frontier Justice provides what the debate over asylum and refugee claims so desperately needs: fresh thinking and historical perspective. Here is a wonderful writer tackling a subject, and a debate, as big as his talent."
—Paul Wells, Maclean's columnist

"[A] superb and immensely readable work."
—The Literary Review of Canada

"Andy Lamey has produced a persuasive argument for changes to refugee systems around the world."
—The Winnipeg Free Press