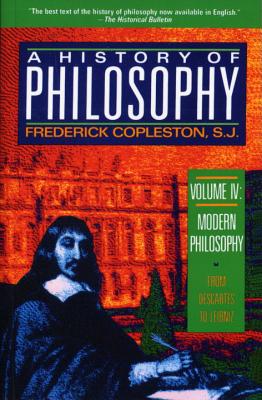 By Frederick Copleston
$19.99
Unavailable, Out of Stock, or Out of Print

This is book number 4 in the Hamster Princess series.

Conceived originally as a serious presentation of the development of philosophy for Catholic seminary students, Frederick Copleston's nine-volume A History Of Philosophy has journeyed far beyond the modest purpose of  its author to universal acclaimas the best history of philosophy in English.

Copleston, an Oxford Jesuit of immense erudition who once tangled with A.J. Ayer in a fabled debate about the existence of God and the possibility of metaphysics, knew that seminary students were fed a woefully inadequate diet of theses and proofs, and that their familiarity with most of history's great thinkers was reduced to simplistic caricatures.  Copleston set out to redress the wrong by writing a complete history of Western philosophy, one crackling with incident and intellectual excitement - and one that gives full place to each thinker, presenting his thought in a beautifully rounded manner and showing his links to those who came after him.

Frederick Copleston grew up in England. He was raised in an Anglican home but converted to Catholicism while a student at Marlborough College. He later became a Jesuit and then pursued a career in academia. He studied and lectured at Heythrop College and wrote an eleven-volume History of Philosophy, which is highly respected. He also spent time teaching at Gregorian University in Rome and, after he retired, lectured at Santa Clara University in California. He was appointed a member of the British Academy in 1970. He is famouse for debating Betrand Russell over the existence of God in a 1948 BBC broadcast.