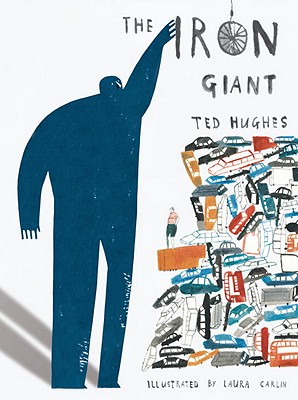 By Ted Hughes, Laura Carlin (Illustrator)
This Book Is Not Sold Online - Inquire In Store
Hard to Find

When a towering giant made of iron appears out of nowhere, young Hogarth sees him not as a monster, but a friend. The townspeople are terrified of the giant and devise a plan to bring him down. But Hogarth believes in his friend, and rescues him when no one else will. Together, they teach the people of the village and beyond to conquer their fears, for beneath the giant's rough armor there beats a mighty heart.
The late Ted Hughes, former poet laureate of England, wrote this modern fairy tale in 1968 (which went on to inspire the popular 1999 Warner Brothers animated feature). This illustrated edition, featuring the complete text, special effects such as foldouts and die-cuts, and striking full-color artwork on every page, offers the perfect family read-aloud.

LAURA CARLIN is a graduate of the Royal College of Art in London. Her work has appeared in publications such as The Guardian and Vogue, and has garnered numerous accolades and honors including the Quentin Blake Award for illustration two years running. She teaches part-time at several universities and is currently involved in setting up London's first-ever illustration gallery.

"The Iron Giant is a story so gripping that when you begin to read it aloud, everyone stops to listen, young children and old people alike. And once you know it, you never forget it. A classic is something utterly strange and original, and yet as deeply familiar and necessary as your own hands. The Iron Giant is like no other story in the world, and thirty years after its first publication, we need it as much as ever." -- Philip Pullman, author of The Golden Compass and The Subtle Knife

"A wonderfully inventive story with the vivid language and startling images of the poet. It has music, momentum, and magic. What else can you ask for?" -- Norton Juster, author of The Phantom Tollbooth

"High-spirited and entertaining... The Iron Giant is a tall-tale hero in a parable for today." -- The Horn Book

"One of the greatest of modern fairy tales." -- The Observer  (England)