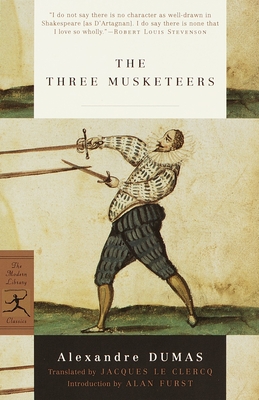 By Alexandre Dumas, Alan Furst (Introduction by), Jacques Le Clercq (Translated by)
$17.00
On Our Shelves Now - Please allow up to 48-hours for Curbside Pickup orders to be processed.

First published in 1844, Alexandre Dumas's swashbuckling epic chronicles the adventures of D'Artagnan, a gallant young nobleman who journeys to Paris in 1625 hoping to join the ranks of musketeers guarding Louis XIII. He soon finds himself fighting alongside three heroic comrades—Athos, Porthos, and Aramis—who seek to uphold the honor of the king by foiling the wicked plots of Cardinal Richelieu and the beautiful spy "Milady." As Clifton Fadiman reflected, "We read The Three Musketeers to experience a sense of romance and for the sheer excitement of the story. In these violent pages all is action, intrigue, suspense, surprise—an almost endless chain of duels, murders, love affairs, unmaskings, ambushes, hairbreadth escapes, wild rides. It is all impossible and it is all magnificent."

Alexandre Dumas, who lived a life as dramatic as any depicted in his more than three hundred volumes of plays, novels, travel books, and memoirs, was born on July 24, 1802, in the town of Villers-Cotterêts, some fifty miles from Paris. He was the third child of Thomas-Alexandre Davy de la Pailleterie (who took the name of Dumas), a nobleman who distinguished himself as one of Napoleon's most brilliant generals, and Marie-Louise-Elisabeth Labouret. Following General Dumas's death in 1806 the family faced precarious financial circumstances, yet Mme. Dumas scrimped to pay for her son's private schooling. Unfortunately he proved an indifferent student who excelled in but one subject: penmanship. In 1816, at the age of fourteen, Dumas found employment as a clerk with a local notary to help support the family. A growing interest in theater brought him to Paris in 1822, where he met François-Joseph Talma, the great French tragedian, and resolved to become a playwright. Meanwhile the passionate Dumas fell in love with Catherine Labay, a seamstress by whom he had a son. (Though he had numerous mistresses in his lifetime Dumas married only once, but the union did not last.) While working as a scribe for the duc d'Orléans (later King Louis-Philippe) Dumas collaborated on a one-act vaudeville, La Chasse et l'amour ( The Chase and Love, 1825). But it was not until 1827, after attending a British performance of Hamlet, that Dumas discovered a direction for his dramas. 'For the first time in the theater I was seeing true passions motivating men and women of flesh and blood,' he recalled. 'From this time on, but only then, did I have an idea of what the theater could be.'

Dumas achieved instant fame on February 11, 1829, with the triumphant opening of Henri III et sa cour (Henry III and His Court). An innovative and influential play generally regarded as the first French drama of the Romantic movement, it broke with the staid precepts of Neoclassicism that had been imposed on the Paris stage for more than a century. Briefly involved as a republican partisan in the July Revolution of 1830, Dumas soon resumed playwriting and over the next decade turned out a number of historical melodramas that electrified audiences. Two of these works—Antony (1831) and La Tour de Nesle (The Tower of Nesle, 1832)—stand out as milestones in the history of nineteenth-century French theater. In disfavor with the new monarch, Louis-Philippe, because of his republican sympathies, Dumas left France for a time. In 1832 he set out on a tour of Switzerland, chronicling his adventures in Impressions de voyage: En Suisse ( Travels in Switzerland, 1834-1837); over the years he produced many travelogues about subsequent journeys through France, Italy, Russia, and other countries.

Around 1840 Dumas embarked upon a series of historical romances inspired by both his love of French history and the novels of Sir Walter Scott. In collaboration with Auguste Maquet, he serialized Le Chevalier d'Harmental in the newspaper Le Siècle in 1842. Part history, intrigue, adventure, and romance, it is widely regarded as the first of Dumas's great novels. The two subsequently worked together on a steady stream of books, most of which were published serially in Parisian tabloids and eagerly read by the public. He is best known for the celebrated d'Artagnan trilogy—Les trois mousquetaires ( The Three Musketeers, 1844), Vingt ans après (Twenty Years After, 1845) and Dix ans plus tarde ou le Vicomte de Bragelonne ( Ten Years Later; or The Viscount of Bragelonne, 1848-1850)—and the so-called Valois romances—La Reine Margot (Queen Margot, 1845), La Dame de Monsoreau ( The Lady of Monsoreau, 1846), and Les Quarante-cinc ( The Forty-Five Guardsmen, 1848). Yet perhaps his greatest success was Le Comte de Monte Cristo ( The Count of Monte Cristo), which appeared in installments in Le Journal des debats from 1844 to 1845. A final tetralogy marked the end of their partnership: Mmoires d'un medecin: Joseph Balsamo ( Memoirs of a Physician, 1846-1848), Le Collier de la reine ( The Queen's Necklace, 1849-1850), Ange Pitou ( Taking the Bastille, 1853), and La Comtesse de Charny ( The Countess de Charny, 1852-1855).

In 1847, at the height of his fame, Dumas assumed the role of impresario. Hoping to reap huge profits, he inaugurated the new Theatre Historique as a vehicle for staging dramatizations of his historical novels. The same year he completed construction of a lavish residence in the quiet hamlet of Marly-le-Roi. Called Le Château de Monte Cristo, it was home to a menagerie of exotic pets and a parade of freeloaders until 1850, when Dumas's theater failed and he faced bankruptcy. Fleeing temporarily to Belgium in order to avoid creditors, Dumas returned to Paris in 1853, shortly after the appearance of the initial volumes of Mes Memoires ( My Memoirs, 1852). Over the next years he founded the newspaper Le Mousquetaire, for which he wrote much of the copy, as well as the literary weekly Le Monte Cristo, but his finances never recovered. In 1858 he traveled to Russia, eventually publishing two new episodes of Impressions de voyage: Le Caucase (Adventures in the Caucasus, 1859) and En Russie (Travels in Russia, 1865).

The final decade of Dumas's life began with customary high adventure. In 1860 he met Garibaldi and was swept up into the cause of Italian independence. After four years in Naples publishing the bilingual paper L'Independant/L'Indipendente, Dumas returned to Paris in 1864. In 1867 he began a flamboyant liaison with Ada Menken, a young American actress who dubbed him 'the king of romance.' The same year marked the appearance of a last novel, La Terreur Prussiene (The Prussian Terror). Dumas's final play, Les Blancs et les Bleus (The Whites and the Blues), opened in Paris in 1869.

Alexandre Dumas died penniless but cheerful on December 5, 1870, saying of death: 'I shall tell her a story, and she will be kind to me.' One hundred years later his biographer Andre Maurois paid him this tribute: 'Dumas was a hero out of Dumas. As strong as Porthos, as adroit as d'Artagnan, as generous as Edmond Dantes, this superb giant strode across the nineteenth century breaking down doors with his shoulder, sweeping women away in his arms, and earning fortunes only to squander them promptly in dissipation. For forty years he filled the newspapers with his prose, the stage with his dramas, the world with his clamor. Never did he know a moment of doubt or an instant of despair. He turned his own existence into the finest of his novels.'

"I do not say there is no character as well-drawn in Shakespeare [as D'Artagnan]. I do say there is none that I love so wholly."
—Robert Louis Stevenson