The Other Paris (Paperback) 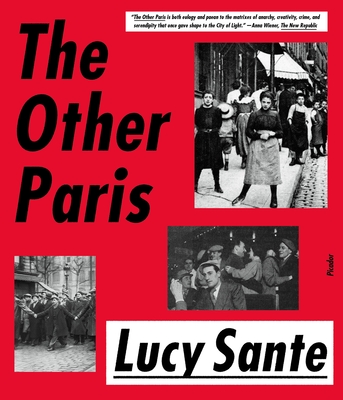 Paris, the City of Lights, the city of fine dining and seductive couture and intellectual hauteur, was until fairly recently always accompanied by its shadow: the city of the poor, the outcast, the criminal, the eccentric, the willfully nonconforming. In The Other Paris, Luc Sante gives us a panoramic view of that second metropolis, which has nearly vanished but whose traces are in the bricks and stones of the contemporary city, in the culture of France itself, and, by extension, throughout the world.

Drawing on testimony from a great range of witnesses, Sante, whose thorough research is matched only by the vividness of his narration, takes the reader on a whirlwind tour. Richly illustrated with more than three hundred images, The Other Paris scuttles through the knotted pre-Haussmann streets, through the improvised accommodations of the original bohemians, through the whorehouses and dance halls and hobo shelters of the old city.

A lively survey of labor conditions, prostitution, drinking, crime, and popular entertainment, and of the reporters, réaliste singers, pamphleteers, and poets who chronicled their evolution, The Other Paris is a book meant to upend the story of the French capital, to reclaim the city from the bons vivants and the speculators, and to hold a light to the work and lives of those expunged from its center by the forces of profit.

Luc Sante was born in Verviers, Belgium. His books include Low Life, The Other Paris, Evidence, The Factory of Facts, and Kill All Your Darlings. He is the recipient of a Whiting Writers' Award, an Award in Literature from the American Academy of Arts and Letters, a Grammy (for album notes), an Infinity Award for Writing from the International Center of Photography, and Guggenheim and Cullman fellowships. Sante has contributed to The New York Review of Books since 1981, and has written for many other magazines. He is the visiting professor of writing and the history of photography at Bard College and lives in Ulster County, New York.

“This brilliant, beautifully written essay is the finest book I have ever read about Paris. Ever. Thank you, Luc Sante.” —Paul Auster

“Nowadays, the old crowded, swarming, surly cities are at least half-forgotten. But in this great chronicle Luc Sante recalls when Paris was rougher, when the poor, the tough, the unregulated, the underworld, thrived there; maybe the city was also less rough, in that there was room for nearly everyone all the way down the social ladder. Hanging over The Other Paris is the contemporary curse of cities that perhaps hit Paris first, of cities that have become bland transnational stopping places for the privileged. Magisterial as ever, Sante returns us to the flavor, texture, savor, shouts, and clashes of the bygone city.” —Rebecca Solnit

“The Other Paris is a heartbreaking spectacle, immense in intellectual and political scope and emotional reach. Peopled by crooks and movie stars, gamblers and thinkers, the world's premier city of dreams is rendered, through Luc Sante's fine hand, historian's eye, and poet's heart, into a place we hardly knew-a world of hitherto unknown mysteries and realities. A grand journey in an epic work.” —Hilton Als

“Sante’s knowledge of the voluminous Paris literature is prodigious . . . Sante’s great gift is his ability to draw on the ‘verbal photography’ of previous writers to send the reader back in time.” —Arthur Goldhammer, BookForum

"Sante vividly captures this “other” Paris . . . The Other Paris is immersive and enjoyable. The abundant pictures are fascinating." —Booklist

“'We have forgotten what a city was,' Luc Sante provocatively writes about Paris. By the last chapter of this absorbing book, we are convinced. Washerwomen and ragpickers, bohemians and clochards, anarchists and apaches, all play their part in this alternative urban history. This is not the Gay Paree of Maurice Chevalier, though he too makes an appearance.” —Witold Rybczynski

“All who love Paris will love this book.” —Kirkus Reviews