Black Mass: Apocalyptic Religion and the Death of Utopia (Paperback) 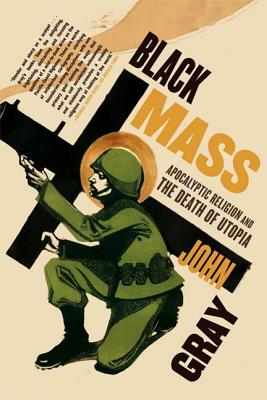 For the decade that followed the end of the cold war, the world was lulled into a sense that a consumerist, globalized, peaceful future beckoned. The beginning of the twenty-first century has rudely disposed of such ideas—most obviously through 9/11and its aftermath. But just as damaging has been the rise in the West of a belief that a single model of political behavior will become a worldwide norm and that, if necessary, it will be enforced at gunpoint.

In Black Mass, celebrated philosopher and critic John Gray explains how utopian ideals have taken on a dangerous significance in the hands of right-wing conservatives and religious zealots. He charts the history of utopianism, from the Reformation through the French Revolution and into the present. And most urgently, he describes how utopian politics have moved from the extremes of the political spectrum into mainstream politics, dominating the administrations of both George W. Bush and Tony Blair, and indeed coming to define the political center. Far from having shaken off discredited ideology, Gray suggests, we are more than ever in its clutches. Black Mass is a truly frightening and challenging work by one of Britain's leading political thinkers.

John Gray is the author of many critically acclaimed books, including Straw Dogs and Al Qaeda and What It Means to Be Modern. A regular contributor to The New York Review of Books, he is a professor of European thought at the London School of Economics.

“Black Mass . . . is a limpidly argued and finely written synthesis of Gray's thinking over the decade or so since False Dawn, his highly regarded and influential study of globalisation. It is not a cheering work, to say the least, and Gray's conclusions, though never exaggerated or overstated, are bleak . . . Yet the right expression of even the bleakest truths is always invigorating, and any half-sensible reader will come away from the book soberer and even, perhaps, wiser.” —John Banville, The Guardian

“Gray is right to scoff at the misplaced faith in progress propounded by Enlightenment philosophers . . . Gray reminds us about more ancient and truthful myths, which predicted that our reckless pursuit of knowledge and power would lead to disaster.” —Peter Conrad, The Observer

“When the fashionable pundits of the age of globalization are as forgotten as those who, in the run-up to World War I, predicted globalization had rendered war obsolete, John Gray's work will still matter. It is at once a reproof and an antidote to the reigning wishful thinking that makes Voltaire's Dr. Pangloss look like a realist. Gray's work has always been about separating reality and delusion. In Black Mass, Gray dissects the greatest of all political delusions, utopianism, and maps the way in which, against all expectations it has migrated from left to right, from communism to neo-conservatism. This is that rarest of things, a necessary book.” —David Rieff