A Sentimental Murder: Love and Madness in the Eighteenth Century (Paperback) 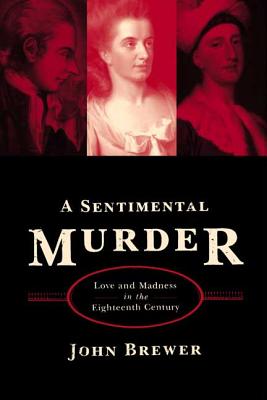 One April evening in 1779, Martha Ray, the pretty mistress of a famous aristocrat, was shot dead at point-blank range by a young clergyman who then attempted to take his own life. Instead he was arrested, tried and hanged. In this fascinating new book, John Brewer, a leading historian of eighteenth-century England, asks what this peculiar little story was all about. Then as now, crimes of passion were not uncommon, and the story had the hallmarks of a great scandal--yet fiction and fact mingled confusingly in all the accounts, and the case was hardly deemed appropriate material for real history.

Was the crime about James Hackman's unrequited love for the virtuous mother of the Earl of Sandwich's illicit children? Or was Ray, too, deranged by passion, as a popular novel suggested? In Victorian times the romance became a morality tale about decadent Georgian aristocrats and the depravity of wanton women who consorted with them; by the 1920s Ray was considered a chaste mistress destroyed by male dominance and privilege. Brewer, in tracing Ray's fate through these protean changes in journalism, memoir, and melodrama, offers an unforgettable account of the relationships among the three protagonists and their different places in English society--and assesses the shifting balance between storytelling and fact, past and present that inheres in all history.

John Brewer is Professor of History and Literature at the California Institute of Technology.

“Provoke[s] us to contemplate the complexities of historical truth, the subtle and often invisible workings of spin in history and in journalism, the interconnections of history and fiction.” —Jonathan Yardley, The Washington Post