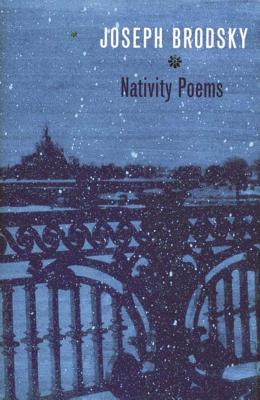 Christmas poems by the Nobel Laureate

To Him, all things seemed enormous: His mother's breast, the
steam out
of the ox's nostrils, Caspar, Balthazar, Melchior, the team
of Magi, the presents heaped by the door, ajar.
He was but a dot, and a dot was the star.
--from "Star of the Nativity"

Joseph Brodsky, who jokingly referred to himself as "a Christian by correspondence," endeavored from the time he "first took to writing poems seriously," to write a poem for every Christmas. He said in an interview: "What is remarkable about Christmas? The fact that what we're dealing with here is the calculation of life--or, at the very least, existence--in the consciousness of an individual, a specific individual." He continued, "I liked that concentration of everything in one place--which is what you have in that cave scene." There resulted a remarkable sequence of poems about time, eternity, and love, spanning a lifetime of metaphysical reflection and formal invention.

In Nativity Poems six superb poets in English have come together to translate the ten as yet untranslated poems from this sequence, and the poems are presented in English in their entirety in a beautiful, pocket-sized edition illustrated with Mikhail Lemkhin's photographs of winter-time St. Petersburg.

Seamus Heaney (1939-2013) received the Nobel Prize in Literature in 1995. His poems, plays, translations, and essays include Opened Ground, Electric Light, Beowulf, The Spirit Level, District and Circle, and Finders Keepers. Robert Lowell praised Heaney as the "most important Irish poet since Yeats."

Glyn Maxwell has long been regarded as one of Britain’s major poets. He has been awarded the Geoffrey Faber Memorial Prize, the Somerset Maugham Prize, and the E.M. Forster Prize from the American Academy of Arts and Letters, as well as being shortlisted three times for both the T.S. Eliot and Forward Prizes. Three of his books were New York Times Notable Books of the Year. His One Thousand Nights and Counting: Selected Poems was published last year. Many of his plays have been staged in London and New York. They include The Lifeblood, which was British Theatre Guide’s ‘Best Play on the Fringe’ at Edinburgh in 2004, Broken Journey and The Only Girl in the World (both Time Out Critics’ Choices). Oberon Books publishes his Plays One (The Lifeblood, The Only Girl in the World and Wolfpit), Plays Two (Broken Journey, Best Man Speech and The Last Valentine), The Forever Waltz, Liberty, After Troy, Merlin and the Woods of Time and the libretti The Lion’s Face and Seven Angels.

Paul Muldoon was born in County Armagh in 1951. He now lives in New York. A former radio and television producer for the BBC in Belfast, he has taught at Princeton University for thirty years. He is the author of over a dozen previous collections of poetry, including Moy Sand and Gravel, for which he won the 2003 Pulitzer Prize; Selected Poems 1968–2014; and, recently, Frolic and Detour.

“Most poets would benefit from having Seamus Heaney, Derek Walcott, Richard Wilbur, and Anthony Hecht render their poems in English--even if the poems were in English already [and in these versions] at times you hear something, not like a bell, but like an echo, of what this poet must sound like in Russian . . . Brodsky, who liked to pass Christmas in Venice, that sinking monument to the decay of architecture and belief, saw with what magnificence a skeptic could contemplate centuries past--these poems express a fealty to the past without being enslaved by it. And there is, almost like frailty, the doubt beneath Brodsky's doubt--you sense he felt the myths might just possibly be true ...” —William Logan, The New Criterion