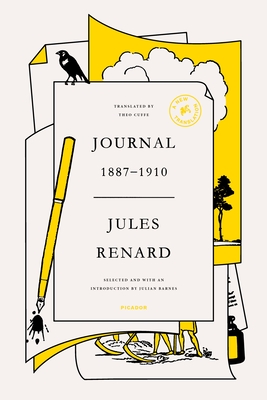 A wry, observant masterpiece—one of the singular treasures of the French fin de siècle

Written between the age of twenty-three and his death at age forty-six, Jules Renard’s Journal 1887–1910 is a triumph of introspection and wit. One of the most celebrated figures of Belle Époque Paris, Renard was also a prolific diarist whose private musings were first published in five volumes some fifteen years after his death. Acclaimed by everyone from Somerset Maugham to Samuel Beckett to Susan Sontag, the Journal has had a decisive influence on contemporary letters and was named one of the 100 Books of the Century by Le Monde. It is also a singularly funny work, full of aphorisms, jokes, and sly observations on some of literature’s most indelible characters.

These selections, brought together by Julian Barnes and translated by Theo Cuffe, offer unparalleled and unfailingly entertaining glimpses of a bygone world. Moving from modish Parisian salons to the French countryside, where Renard served as a provincial mayor in the final years of his life, the Journal is a portrait of a society in flux and a playground for one of the era’s great prose styles. Here, Renard confirms his place among France’s most dazzlingly inventive writers.

Jules Renard (1864–1910) was a French author and member of the Académie Goncourt. A habitué of Parisian literary circles, he was the author of numerous novels and plays, among them Carrot Top and Natural Histories. His Journal, widely considered his masterpiece, was published posthumously between 1925 and 1927.

Theo Cuffe is known for his translations of classic French literature, including Voltaire’s Candide and Micromégas and Other Short Fictions.

Julian Barnes is the Booker Prize–winning author of The Sense of an Ending and numerous other books.

"In his diary, Renard, always funny and frank, translates his daily adventures into plot and dialogue, aphorisms and jokes . . . Renard is a one-man one-liner generator." —Sarah Manguso, The New Yorker

"Renard was a brilliant noticer of things . . . [He] termed his brand of forensic attention ‘scrupulous inexactness’, and his journal succeeds on its own terms precisely because of this ‘inexactness’. It’s a thrill to see him turn his eye on his own circle." —Richard Taws, London Review of Books