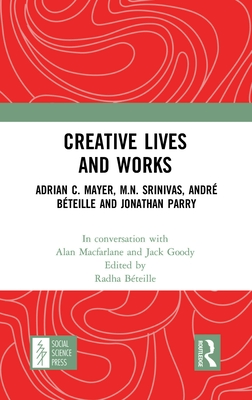 By Alan MacFarlane, Jack Goody, Radha Béteille (Editor)
$170.00
Unavailable, Out of Stock, or Out of Print

Creative Lives and Works: Adrian C. Mayer, M.N. Srinivas, Andr B teille and Johnathan Parry is a collection of interviews conducted by one of England's leading social anthropologists and historians, Professor Alan Macfarlane. Filmed over a period of 40 years, the four conversations in this volume, are part of a larger set of interviews that cut across various disciplines, from the social sciences, the sciences to the performing and visual arts. The current volume, on four of the world's foremost social anthropologists and sociologists, who have been closely associated with the British anthropological tradition, is the third in the series of several such books. These conversations focus primarily on fieldwork experience in India and how new dimensions and interpretations were added to the discipline of sociology and social anthropology as more and more primitive cultures and ancient civilizations were studied. This book brings out the diversity of the Indian subcontinent and its people through its engaging conversations and occasional anecdotes. Immensely riveting as conversations, this collection gives one a flavour of the many different cultures that coexist in a vast country like India, often with no knowledge of each other's existence while de-jargonizing complex sociological concepts. The book will be of enormous value not just to those interested in the subject of Sociology, Social Anthropology and Ethnography, but also those with an avid interest in History, Culture Studies as well as those with an interest in learning about other societies.

Please note: This title is co-published with Social Science Press, New Delhi. Taylor & Francis does not sell or distribute the Hardback in India, Pakistan, Nepal, Bhutan, Bangladesh and Sri Lanka.

Alan Macfarlane was born in Shillong, India, in 1941 and educated at the Dragon School, Sedbergh School, Oxford and London Universities where he received two Master's degrees and two doctorates. He is the author of over forty books, including The Origins of English Individualism (1978) and Letters to Lily: On How the World Works (2005). He has worked in England, Nepal, Japan and China as both an historian and anthropologist. He was elected to the British Academy in 1986 and is now Emeritus Professor of Anthropology at the University of Cambridge and a Life Fellow of King's College, Cambridge. Professor Macfarlane received the Huxley Memorial Medal, the highest honour of the Royal Anthropological Institute in 2012.