Vertigo Comics: British Creators, US Editors, and the Making of a Transformational Imprint (Routledge Advances in Comics Studies) (Hardcover) 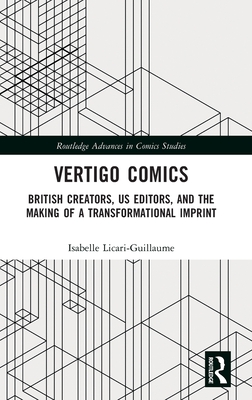 This book explores the so-called "British Invasion" of DC Comics' Vertigo imprint, which played an important role in redefining the mainstream comics industry in the US during the early 1990s.

Focusing on British creators within Vertigo, this study traces the evolution of the line from its creation in 1993 to its demise in 2019. Through an approach grounded in cultural history, the book disentangles the imprint's complex roots, showing how editors channelled the potential of its British writers at a time of deep-seated economic and cultural change within the comics industry, and promoted a sense of cohesion across titles that defied categories. The author also delves into lesser-known aspects of the Invasion, exploring less-canonical periods and creators that are often eclipsed by Vertigo's early star writers.

An innovative contribution on a key element of comic book history, this volume will appeal both to researchers of Vertigo scholarship and to fans of the imprint. It will also be an essential read for those interested in transatlantic collaborations and exchanges in the entertainment industry, processes of cultural legitimation and cultural hierarchies, and to anyone working on the representation of national and social identities.