The First Shots: The Epic Rivalries and Heroic Science Behind the Race to the Coronavirus Vaccine (Hardcover) 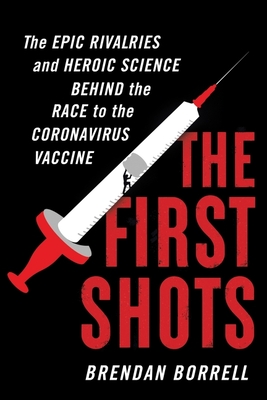 The full inside story of the high-stakes, global race for the lifesaving vaccine to end the pandemic

Heroic science. Chaotic politics. Billionaire entrepreneurs. Award-winning journalist Brendan Borrell brings the defining story of our times alive through compulsively readable, first-time reporting on the players leading the fight against a vicious virus. The First Shots, soon to be the subject of an HBO limited series with superstar director and producer Adam McKay (Succession, Vice, The Big Short), draws on exclusive, high-level access to weave together the intense vaccine-race conflicts among hard-driving, heroic scientists and the epic rivalries among Washington power players that shaped 18 months of fear, resolve, and triumph.

From infectious disease expert Michael Callahan, an American doctor secretly on the ground in Wuhan in January 2020 to gauge the terrifying ravages of Disease X; to Robert (Dr. Bob) Kadlec, one of Operation Warp Speed’s architects, whose audacious plans for the American people run straight into the buzz saw of the Trump White House factions; to Stéphane Bancel of upstart Moderna Therapeutics going toe-to-toe with pharma behemoth Pfizer, The First Shots lays bare, in a way we have not seen, the full stunning story behind the medical science “moon shot” of our lifetimes.

BRENDAN BORRELL is a biologist-turned-journalist, who has written on science, health, and business for The Atlantic, Bloomberg Businessweek, National Geographic, Outside, Wired, and the New York Times. Borrell lives in Los Angeles, and The First Shots is his first book.

"For decades we’ll be studying where our country succeeded and how it faltered in its fight against the worst pandemic in 100 years. In his vivid account of the tumultuous journey toward developing a coronavirus vaccine, Brendan Borrell offers immediate and hugely valuable insights. Beyond the chaotic politics, clashing egos and erratic logistics were unprecedented scientific achievements. Those audacious efforts, and the people behind them, come fully to life in Borrell’s absorbing narrative." — Marty Baron, Executive Editor (retired) of The Washington Post

“Brendan Borrell has delivered the definitive account of the race to develop and manufacture the vaccines needed to combat Covid-19. The book does a masterful job of explaining the science behind the vaccines while unfurling a vivid story full of exceptional characters locked in a thrilling competition to do nothing less than try and save the world. It's a gripping tale of what happens when unlikely heroes battle through extraordinary circumstances.”   — Ashlee Vance, author of Elon Musk: Tesla, SpaceX, And The Quest For A Fantastic Future

"Borrell focuses…on political and turf wars and the uneven federal response to the pandemic, highlighted by the Hunger Games-esque competition among states for necessary supplies, and the lack of federal guidelines and high-level role-modeling for the wearing of masks…[A] dramatic and fast-moving tale of the outbreak response and vaccine development." — Washington Post

“[For his] tale of America’s pandemic response…Borrell had great access inside the Trump administration, and there are juicy details.” — New York Times Book Review

"Borrell’s gripping, behind-the-scenes look at the race for a COVID vaccine reads like a thriller. But it’s also a stunning look at politics, greed, ego – and scientific brilliance, from the arduous task of production, then testing, to decisions about who gets immunized first.”  — People

"Borrell’s book shines in his absorbing account of how, against the odds, the government-backed public–private vaccine-development plan—Operation Warp Speed—arose from the primordial sludge of pandemic policymaking inside the Trump White House.”  — Nature

“A vivid portrait of the combination of drudgery, greed, legerdemain, and brilliance that made the vaccines a reality in record time… a meticulous, thrilling account.”  — Kirkus Reviews, *starred* review

"Brendan Borrell’s engaging, often intriguing study – involving an epic cast of characters and a complex list of companies and organizations – captures the combination of urgency and often shambolic politics of what was a global effort….There’s a real fly-on-the-wall sense of immediacy to his portrait of the time." — Sydney Morning Herald

“Relying on extensive firsthand sources, Borrell has produced a readable and detailed early account of developing and implementing [the Covid] vaccines….Clashes of egos and the potential prestige and profits involved in being the first to succeed produce a story that reads like a thriller.” — Library Journal

"A powerful behind-the-scenes look at Operation Warp Speed . . . a page-turning introduction to a key part of the pandemic."  — Publishers Weekly, *starred* review

“Just like the COVID vaccine that went into your arm and mine, this book is an astonishingly powerful synthesis of intelligence, exertion, and speed. Brendan Borrell has written a compelling, up-to-the-minute chronicle of a pivotal moment in the history of science. You will learn something new on every page of The First Shots.” — Dan Fagin, author of the Pulitzer Prize–winning Toms River: A Story of Science and Salvation