They Bled Blue: Fernandomania, Strike-Season Mayhem, and the Weirdest Championship Baseball Had Ever Seen: The 1981 Los Angeles Dodgers (Paperback) 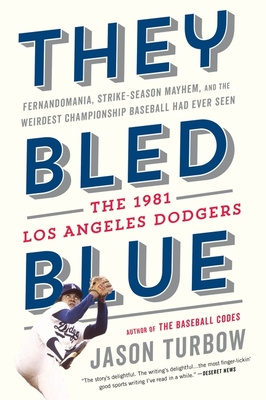 By Jason Turbow
$16.99
In Stock Now - Click Title to See Store Inventory. Please allow up to 48-hours for Curbside Pickup orders to be processed.

The wildly entertaining narrative of the outrageous 1981 Dodgers from the award-winning author of Dynastic, Fantastic, Bombastic and The Baseball Codes

In the Halberstam tradition of capturing a season through its unforgettable figures, They Bled Blue is a sprawling, mad tale of excess and exuberance, the likes of which could only have occurred in that place, at that time.

That it culminated in an unlikely World Series win—during a campaign split by the longest player strike in baseball history—is not even the most interesting thing about this team. The Dodgers were led by the garrulous Tommy Lasorda—part manager, part cheerleader—who unyieldingly proclaimed devotion to the franchise through monologues about bleeding Dodger blue and worshiping the “Big Dodger in the Sky,” and whose office hosted a regular stream of Hollywood celebrities. Steve Garvey, the All-American, All-Star first baseman, had anchored the most durable infield in major league history, and, along with Davey Lopes, Bill Russell, and Ron Cey, was glaringly aware that 1981 would represent the end of their run together. The season’s real story, however, was one that nobody expected at the outset: a chubby lefthander nearly straight out of Mexico, twenty years old with a wild delivery and a screwball as his flippin’ out pitch. The Dodgers had been trying for decades to find a Hispanic star to activate the local Mexican population; Fernando Valenzuela was the first to succeed, and it didn’t take long for Fernandomania to sweep far beyond the boundaries of Chavez Ravine.

They Bled Blue is the rollicking yarn of the Los Angeles Dodgers’ crazy 1981 season.

JASON TURBOW is the author of the best-selling The Baseball Codes: Beanballs, Sign Stealing & Bench-Clearing Brawls: The Unwritten Rules of America’s Pastime and Dynastic, Bombastic, Fantastic. He has written for the New York Times, the Wall Street Journal, and SI.com. He lives in California.

"The names are larger than life, the games are some of the greatest in Major League history. But what makes 'They Bled Blue' a fantastic baseball book is the passion. Love the Dodgers or hate the Dodgers, this return trip to 1981 will leave you pining for Fernandomania and and wishing you were a kid again, sitting in front of your TV with two outs in the bottom of the ninth, Ron Cey at the plate and Goose Gossage throwing smoke. Bravo, Jason Turbow. This is epic."
—Jeff Pearlman, New York Times best-selling author

"1981 was a special but strange year. The baseball strike in the middle of the season, my first All-Star appearance and a championship…They Bled Blue captures the season extraordinarily well.  A thoroughly engaging look at a truly wild ride."
—Dusty Baker, former MLB player for the Atlanta Braves and the Los Angeles Dodgers and current Special Advisor to the CEO for the San Francisco Giants

"They Bled Blue was eye-opening, thought-provoking, and hands down the most accurate portrayal of events and personalities of the 1981 Dodgers that I've seen. I enjoyed every minute reading it, and no doubt will page through it again to relive the best baseball year of my life."
—Jerry Reuss, former MLB player for the Los Angeles Dodgers

“The spirited tale of a unique Major League Baseball championship team . . . The 1981 Los Angeles Dodgers produced enough fireworks to deserve significant attention, and Turbow delivers the goods . . . A skillful mixture of biographies, on-field action, and behind-the-scenes baseball politics in a story with a happy ending for Dodger fans.”
—Kirkus Reviews

"Riveting . . . With a heady mix of reportage, biography, and classic play-by-play coverage, Turbow meticulously traces the arc of the team’srise . . . Fluidly written and expertly paced, this exciting look at a turbulent team will thrill baseball enthusiasts of all stripes."
—Publishers Weekly, *starred* review

“Veteran journalist Turbow drives the tale of the ’81 Dodgers through careful examination of the personalities on the team and in the front office. It’s a story made all the more compelling when viewed through the lens of societal upheaval.”
—Booklist

“An entertaining work for all reading baseball fans.”
—Library Journal

"Jason Turbow has created the best possible summer confection with this story of the 1981 Los Angeles Dodgers. Everything about 'They Bled Blue' is completely delightful: The story’s delightful. The writing’s delightful. The footnotes are a total treat. But Turbow’s book isn’t just for Dodgers fans — it’s for fans of the game, the underdog and just plain good writing. It’s hard not to love every page about Tommy Lasorda, for example, because Turbow has captured him as the larger-than-life character he’s always been. And that’s what makes this book pool-worthy reading this summer: These are true characters who also happen to be Major League Baseball players. Turbow’s wrangled them in all their 'Bad-News-Bears'-meets-'Field-of-Dreams' glory and recorded them with the most finger-lickin’ good sports writing I’ve read in a while."
—Deseret News