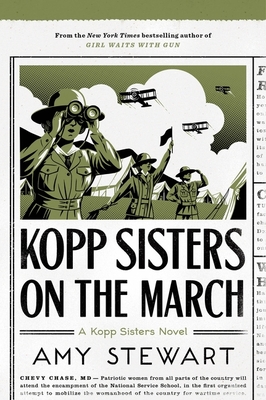 This is book number 5 in the A Kopp Sisters Novel series.

In the fifth installment of Amy Stewart’s clever and original Kopp Sisters series, the sisters learn some military discipline—whether they’re ready or not—as the U.S. prepares to enter World War I.

It’s the spring of 1917 and change is in the air. American women have done something remarkable: they’ve banded together to create military-style training camps for women who want to serve. These so-called National Service Schools prove irresistible to the Kopp sisters, who leave their farm in New Jersey to join up.

When an accident befalls the matron, Constance reluctantly agrees to oversee the camp—much to the alarm of the Kopps’ tent-mate, the real-life Beulah Binford, who is seeking refuge from her own scandalous past under the cover of a false identity. Will she be denied a second chance? And after notoriety, can a woman’s life ever be her own again?

In Kopp Sisters on the March, the women of Camp Chevy Chase face down the skepticism of the War Department, the double standards of a scornful public, and the very real perils of war. Once again, Amy Stewart has brilliantly brought a little-known moment in history to light with her fearless and funny Kopp sisters novels.

"Constance Kopp takes on the military establishment in Kopp Sisters on the March, the fifth in Amy Stewart’s entertaining series about three fiercely feminist sisters who refuse to believe that men are meant to rule the world."  — Washington Post     "Loosely inspired by an actual crime fighter...the brisk Kopp Sisters on the March, with Constance and her sisters — crabby Norma and dreamy Fleurette — enrolling in one of the National Service Schools that prepared women for what World War I would require of them, on the home front or overseas."  — Star-Tribune     "Told in Stewart’s nimble, witty prose, this fifth in the popular series is based largely on fact and offers a paean to patriotism and the role women have played in war, even a century ago. Devoted fans will be pleased with the tantalizing hint Stewart provides about what lies ahead for Constance." —Booklist, starred review   "A thrilling mix of history and feminism, this new “Kopp” story contains the same captivating storytelling as the first one, with plenty of nuggets for series fans."  —Library Journal, starred review   "Set in the spring of 1917, Stewart’s enjoyable fifth Kopp Sisters novel finds the three Kopp sisters ready to do their bit as the U.S. prepares to enter WWI...Convincing characters behave in ways true to their era. Stewart does a wonderful job of illuminating a fascinating period in American history."  — Publishers Weekly     "A feisty, fact-based series...After losing her dream job as Bergen County deputy sheriff, Constance Kopp regroups at a Maryland Army camp for women on the eve of World War I...Plenty of loose ends are dangled for future volumes as Constance and Beulah both make peace with their pasts and plans to move forward."  — Kirkus Reviews       —