The Evolution of Beauty: How Darwin's Forgotten Theory of Mate Choice Shapes the Animal World - and Us (Paperback) 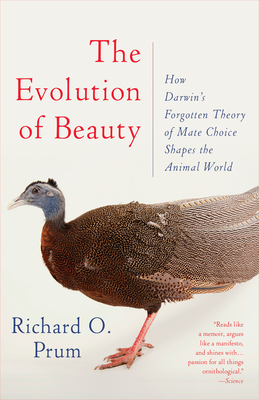 A major reimagining of how evolutionary forces work, revealing how mating preferences—what Darwin termed "the taste for the beautiful"—create the extraordinary range of ornament in the animal world.

In the great halls of science, dogma holds that Darwin's theory of natural selection explains every branch on the tree of life: which species thrive, which wither away to extinction, and what features each evolves. But can adaptation by natural selection really account for everything we see in nature?
Yale University ornithologist Richard Prum—reviving Darwin's own views—thinks not. Deep in tropical jungles around the world are birds with a dizzying array of appearances and mating displays: Club-winged Manakins who sing with their wings, Great Argus Pheasants who dazzle prospective mates with a four-foot-wide cone of feathers covered in golden 3D spheres, Red-capped Manakins who moonwalk. In thirty years of fieldwork, Prum has seen numerous display traits that seem disconnected from, if not outright contrary to, selection for individual survival. To explain this, he dusts off Darwin's long-neglected theory of sexual selection in which the act of choosing a mate for purely aesthetic reasons—for the mere pleasure of it—is an independent engine of evolutionary change.
Mate choice can drive ornamental traits from the constraints of adaptive evolution, allowing them to grow ever more elaborate. It also sets the stakes for sexual conflict, in which the sexual autonomy of the female evolves in response to male sexual control. Most crucially, this framework provides important insights into the evolution of human sexuality, particularly the ways in which female preferences have changed male bodies, and even maleness itself, through evolutionary time.
The Evolution of Beauty presents a unique scientific vision for how nature's splendor contributes to a more complete understanding of evolution and of ourselves.

RICHARD O. PRUM is William Robertson Coe Professor of Ornithology at Yale University, and Head Curator of Vertebrate Zoology at the Yale Peabody Museum of Natural History. He has conducted field work throughout the world, and has studied fossil theropod dinosaurs in China. He received a MacArthur Fellowship in 2010.

NAMED A BEST BOOK OF THE YEAR BY THE NEW YORK TIMES BOOK REVIEW, SMITHSONIAN, AND WALL STREET JOURNAL

"Prum's argument is exhilarating . . . The Evolution of Beauty should be widely read, as it will provoke readers, shaking them (as reading Hume did to Kant) from their dogmatic slumbers . . . I don’t see how any biologist could read this book and not walk away at least questioning the idea that adaptation must explain every last trait. Survival of the fittest might not be enough to explain nature. We might need survival of the prettiest, too."
—Sam Kean, Wall Street Journal

"The single most provocative book I read this year, one of those books that changes the way you look at everything . . . Everything about this book is unexpected, including the prose–fine and often funny."
—Michael Pollan

“The Evolution of Beauty is at once fascinating, provocative, and totally compelling. Anyone interested in science or art or sex—which is to say everyone—will want to read it.”
—Elizabeth Kolbert, author of The Sixth Extinction

“A fascinating account of beauty and mate choice in birds and other animals. You’ll be amazed by the weird things that birds do to win mates. You’ll also discover why both men and women have armpit hair, why men lack the penis bone widespread in other mammals, and what really happened in the Garden of Eden.”
—Jared Diamond, Pulitzer Prize-winning author of Guns, Germs, and Steel

"A major intellectual achievement that should hasten the adoption of a more expansive style of evolutionary explanation that Darwin himself would have appreciated."
—Nick Romeo, Washington Post

“A smorgasbord of evolutionary biology, philosophy, and sociology, filtered through Prum’s experiences as a birdwatcher and his diverse research on everything from dinosaur colors to duck sex. Through compelling arguments and colorful examples, Prum launches a counterstrike against the adaptationist regime, in an attempt to ‘put the subjective experience of animals back in the center of biology’ and to ‘bring beauty back to the sciences.’”
—Ed Yong, The Atlantic

“Prum’s career has been diverse and full, so that reading this fascinating book, we learn about the patterning of dinosaur feathers, consider the evolutionary basis of the human female orgasm, the tyranny of academic patriarchy, and the corkscrewed enormity of a duck’s penis. Combining this with in-depth study of how science selects the ideas it approves of and fine writing about fieldwork results in a rich, absorbing text . . . The dance Prum performs to convince you to take him on as an intellectual partner is beautiful and deserves to be appreciated on its own terms.”
—Adrian Barnett, New Scientist

"Reads like a memoir, argues like a manifesto, and shines with Prum's passion for all things ornithological."
—Erika Lorraine Milam, Science

“Life isn’t just a dreary slog of survival. It brims with exuberance—from extravagant plumage to strange courtship rituals. In The Evolution of Beauty, Richard Prum takes us into this universe of delights to discover a fascinating idea: that beauty is central to the history of life.”
—Carl Zimmer, author of Parasite Rex and Evolution: Making Sense of Life