The Underground Railroad: A Novel (Paperback)

This will live in my head forever and will definitely be a novel I reread for the rest of my life. I was already blown away by Colson's writing and The Underground Railroad raised the bar higher than I could have imagined. This story melds together everything a historical fiction aspires to hold-beauty, powerful prose, tragic and hopeful storytlines, and characters that are real. With the imagining of an actual underground railroad and a dark part of our country's history that is too often ignored or minimalized, I felt like I was getting both a history course and literature course at once.

I've read a fair number of slave journals and novels about slavery (my favorite = James McBride's Song Yet Sung), so I was thoroughly pleased when I found The Underground Railroad to be a fresh take (similar to how I felt that All The Light We Cannot See was a fresh take on WW II, about which I have also read a fair amount).  I love how Whitehead combined a personal story with a more universal chorus of voices and experiences.  His deft weaving in of post-slavery African American experiences/atrocities, like the Tuskegee syphilis experiment and the Eugenics movement's sterilization programs, etc. was brilliant, as was contextualizing it all in the history of the U.S., especially manifest destiny's ruthless march west, that also opened up such promise.

An unflinching and imaginative look at slavery and one woman's determination to free herself. 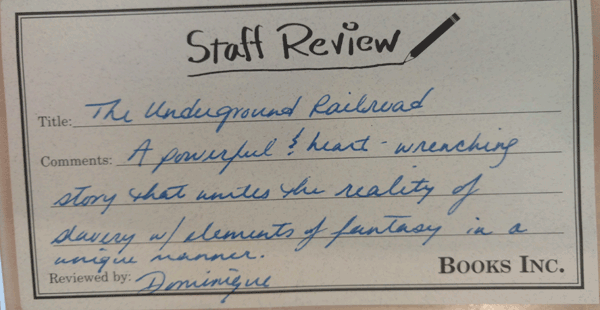 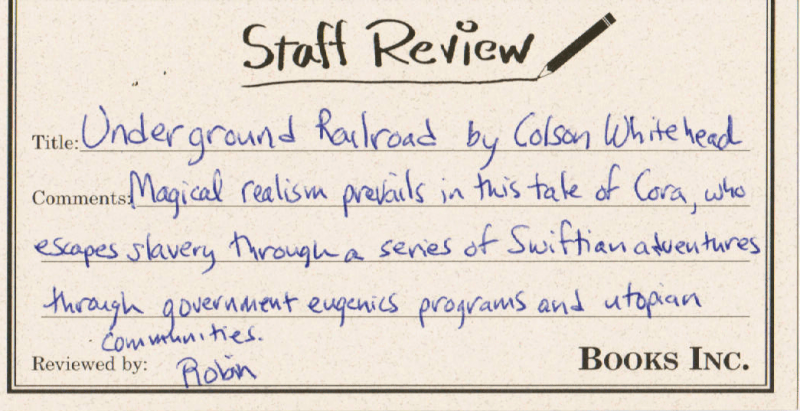 “In The Underground Railroad, Whitehead captures the quotidian horror of slavery in a way that I’ve never read. The banality of evil is on full display—but so is the human spirit. Cora’s escape and life on the run is both terrifyingly real and uncomfortably familiar. The way the author plays fast and loose with time and elements of magical realism, such as making the Underground Railroad a literal thing, gives this story an otherworldly quality. This may be Colson Whitehead’s masterpiece.”
— James Wilson, Octavia Books, New Orleans, LA

Winner of the Pulitzer Prize and the National Book Award, this #1 New York Times bestseller chronicles a young slave's adventures as she makes a desperate bid for freedom in the antebellum South. The basis for the acclaimed original Amazon Prime Video series directed by Barry Jenkins.

Cora is a slave on a cotton plantation in Georgia. An outcast even among her fellow Africans, she is on the cusp of womanhood—where greater pain awaits. And so when Caesar, a slave who has recently arrived from Virginia, urges her to join him on the Underground Railroad, she seizes the opportunity and escapes with him.

In Colson Whitehead's ingenious conception, the Underground Railroad is no mere metaphor: engineers and conductors operate a secret network of actual tracks and tunnels beneath the Southern soil. Cora embarks on a harrowing flight from one state to the next, encountering, like Gulliver, strange yet familiar iterations of her own world at each stop.

As Whitehead brilliantly re-creates the terrors of the antebellum era, he weaves in the saga of our nation, from the brutal abduction of Africans to the unfulfilled promises of the present day. The Underground Railroad is both the gripping tale of one woman's will to escape the horrors of bondage—and a powerful meditation on the history we all share.

Colson Whitehead is the #1 New York Times bestselling author of The Underground Railroad, which in 2016 won the Pulitzer Prize in Fiction and the National Book Award and was named one of the Ten Best Books of the Year by The New York Times Book Review, as well as The Noble Hustle, Zone One, Sag Harbor, The Intuitionist, John Henry Days, Apex Hides the Hurt, and The Colossus of New York. He is also a Pulitzer Prize finalist and a recipient of the MacArthur and Guggenheim Fellowships. He lives in New York City.

“Electrifying. . . . Tense, graphic, uplifting and informed, this is a story to share and remember.” —People

“The Underground Railroad is inquiring into the very soul of American democracy. . . . A stirring exploration of the American experiment.” —The Wall Street Journal

“Colson Whitehead’s book blends the fanciful and the horrific, the deeply emotional and the coolly intellectual. Whathe comes up with is an American masterpiece.”—Ann Patchett, author of Bel Canto

“The Underground Railroad enters the pantheon of . . . the Great American Novels. . . . A wonderful reminder of whatgreat literature is supposed to do: open our eyes, challengeus, and leave us changed by the end.” —Esquire

“Brilliant. . . . An instant classic that makes vivid the darkest, most horrific corners of America’s history of brutality against black people.” —HuffPost

“Singular, utterly riveting. . . . You’ll be shaken and stunned by Whitehead’s imaginative brilliance. . . . The Underground Railroad is a book both timeless and timely. It is a book for now; it is a book that is necessary.” —BuzzFeed

“Whitehead is a writer of extraordinary stylistic powers. . . . [The Underground Railroad] offers many testaments to Whitehead’s considerable talents and examines a deeply relevant and disturbing period of American history.”—The Christian Science Monitor

“[An] ingenious novel. . . . A successful amalgam: a realistically imagined slave narrative and a crafty allegory; a tense adventure tale and a meditation on America’s defining values.” —Minneapolis Star Tribune

“Whitehead’s novel unflinchingly turns our attention to the foundations of the America we know now.” —Elle

“Perfectly balances the realism of its subject with fabulist touches that render it freshly illuminating.” —Time

“I haven’t been as simultaneously moved and entertained bya book for many years. This is a luminous, furious, wildly inventive tale that not only shines a bright light on one of the darkest periods of history, but also opens up thrilling new vistas for the form of the novel itself.”—Alex Preston, The Guardian