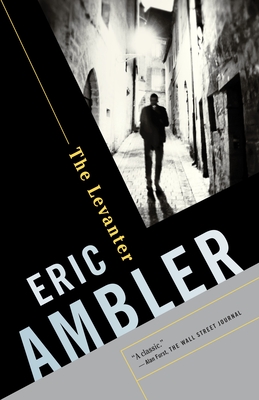 Syria, 1970. Michael Howell has kept his family’s Middle Eastern business enterprises going through a decade of takeovers, war, and revolution, thanks in part to his office manager, Teresa, who is also his mistress. One late night at the office, they discover men working overtime—producing unauthorized bombs for the Palestine Action Force. Worse, this guerrilla terrorist group is not deterred by their discovery—rather, they will enlist Howell and Teresa’s unwilling help in carrying out their plan.

Eric Ambler was born in London in 1909. Before turning to writing full-time, he worked at an engineering firm, and wrote copy for an advertising agency. His first novel was published in 1936. During the course of his career, Ambler was awarded two Gold Daggers, a Silver Dagger, and a Diamond Dagger from the Crime Writers Association of Great Britain, named a Grand Master by the Mystery Writers Association of America, and made an Officer of the Order of the British Empire by Queen Elizabeth II. In addition to his novels, Ambler wrote a number of screenplays, including A Night to Remember and The Cruel Sea, which won him an Oscar nomination. Eric Ambler died in 1998.

“[A] complex exploration of power, responsibility, and identity in the modern high-tech world. . . . [Ambler’s works are] political novels of a high order.” —The Washington Post

“A rarity . . . a thriller which compels belief.” —The Guardian (London)

“The best book he has written since the war. . . . It’s got everything the reader can possibly want . . . beautifully done.” —The Observer (London)

“Ambler is, quite simply, the best.” —The New Yorker

“Although the Old Master of Intrigue had been writing for more than 35 years when [The Levanter was] first published, he most certainly had not lost his touch.”—The New York Times Book Review

“The foremost thriller writer of our time.” —Time

“Brilliant. . . . To see [this] ordinary man thrust into an extraordinarily difficult situation and rising to the challenge is one of the most snugly satisfying scenes in fiction.” —The New York Times