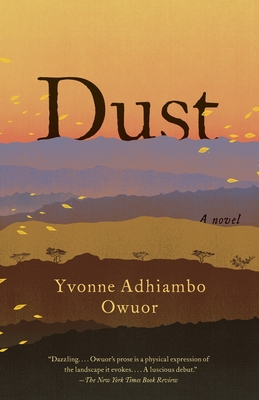 When a young man is gunned down in the streets of Nairobi, his grief-stricken father and sister bring his body back to their crumbling home in the Kenyan drylands. But the murder has stirred up memories long since buried, precipitating a series of events no one could have foreseen. As the truth unfolds, we come to learn the secrets held by this parched landscape, hidden deep within the shared past of a family and their conflicted nation. Spanning Kenya’s turbulent 1950s and 1960s, Dust is spellbinding debut from a breathtaking new voice in literature.

Yvonne Adhiambo Owuor was born in Kenya. Winner of the Caine Prize for African Writing, she has also received an Iowa Writers’ Fellowship. Her work has appeared in McSweeney’s and other publications, and she has been a TEDx Nairobi speaker and a Lannan Foundation resident. She lives in Brisbane, Australia.

“Dazzling. . . . Owuor’s prose is a physical expression of the landscape it evokes. . . . [A] luscious debut.” —The New York Times Book Review

“Astonishing. . . . In this remarkable novel is a brave, healing voice. . . . Owuor demonstrates extraordinary talent. . . . Let the sensuous language of Dust wash over you.” —The Washington Post

“[An] unforgettable book, full of love and full of pain. . . . This is the novel my twenty-first century has been waiting for, for our world in these seismic times.” —Binyavanga Wainaina, author of One Day I Will Write About This Place

“Dust anchors Owuor as the rightful heir to Kenya’s greatest novelist: Ngugi wa Thiong’o. . . . A dazzling narrative, Faulknerian in many ways. . . . The rewards are significant, especially [the] unforgettable characters. . . . [Readers] are rewarded with a genuine sense of fulfillment. Owuor’s is a new voice from the African continent—distinct, rich, unflappable in her convictions. . . . Amazing.” —CounterPunch

“Owuor dives back into Kenya’s history as far as the Mau Mau uprising of the 1950s. . . . Challenging . . . but the reader is repaid with scenes of strange, horror-stricken beauty.” —The Wall Street Journal

“A chilling portrait of Kenya that’s brimming with pain and promise. . . . Owuor is taking her place in Kenya’s long line of outstanding writers. . . . Brilliant.” —Essence magazine

“[Owuor’s] prose can be inventive, even breathtaking, turning phrases or fusing unexpected words in ways that confound and inspire. . . . The next step in what I anticipate to be a prodigious career.” —Colin Dwyer, NPR

“There is hardly any aspect of Kenya that Owuor seems unable to tackle with her unique flair in this masterfully executed novel, from the mid–20th century’s Mau Mau rebellion and its aftermath to the stirring personal destinies of her sundry cast of characters. . . . Her writing is exceptionally chiseled and achieves a poetic dimension.” —Publishers Weekly (starred, boxed review)

“Owuor’s prose dances along the page with grace and elegance.” —The Toronto Star

“[Owuor] has style to spare. . . . [Her] prose has an appealingly rough-hewn poetry, built on clipped sentences and brush-stroke evocations of the dry landscape.” —Kirkus Reviews

“Powerful . . . [Dust] will evoke references to William Boyd and even to Graham Greene and Joseph Conrad. . . . [An] important addition to the literature of contemporary Africa.” —Booklist

“This stunning debut novel grabs the reader’s heart, refusing to let go. . . . Unforgettable characters and universal themes will speak to all readers who seek truth and beauty in their literature. . . . [Owuor is a] shining talent among Africa’s writers.” —Library Journal (starred review)