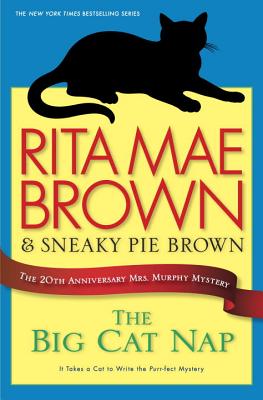 To celebrate the twentieth anniversary of the beloved Mrs. Murphy mystery series, Rita Mae Brown and her intrepid feline co-author Sneaky Pie Brown return with a charming claw-biting tale starring Mary Minor “Harry” Haristeen. Of course prowling faithfully at Harry’s side are the sleuthing cats Mrs. Murphy, ever wise, and Pewter, reliably cranky and always primed with a razor-sharp quip. Fiercely loyal and on the alert, corgi Tee Tucker is also never far behind. This time, Harry and her menagerie throw a wrench into the gears of a killer of grease monkeys.

It’s mid-May, and Crozet, Virginia, is heating up fast, or so it seems to Harry. The town’s beloved ex–post mistress is never idle, dividing her time between raising this year’s bounty of crops; taking care of her veterinarian husband, Fair; indulging her passion for classic cars; and adding further to her reputation as a nosy neighbor. It starts when Harry’s dear friend Miranda Hogendobber takes her on a leisurely drive that ends in a narrow drainage ditch. The chaos continues when the Very Reverend Herbert Jones’s Chevy pick-up also abruptly goes kaput. But these vehicular mishaps are nothing compared to the much more distressing state of a mechanic discovered by Harry in a local repair shop: His head’s been bashed in.

Despite numerous warnings from her much-loved coterie of friends, human and otherwise, Harry rather quickly surmises that the time has come to pop the hood and conduct her own investigation. Her animal companions see disaster fast approaching but can do little except try their best to protect their foolishly intrepid human. Harry’s race to the truth leads straight to powerful forces determined to avoid scrutiny at any cost—even if it means running Harry Haristeen off the road for good.

Rita Mae Brown is the bestselling author of several novels, including the Sneaky Pie Brown series; the Sister Jane series; the first two books in her new canine mystery series: "A Nose for Justice" and "Murder Unleashed; Rubyfruit Jungle; In Her Day; "and "Six of One. "An Emmy-nominated screenwriter and a poet, Brown lives in Afton, Virginia.

Sneaky Pie Brown, a tiger cat born somewhere in Albemarle County, Virginia, was discovered by Rita Mae Brown at her local SPCA. They have collaborated on nineteen previous Mrs. Murphy mysteries: "Wish You Were Here; Rest in Pieces; Murder at Monticello; Pay Dirt; Murder, She Meowed; Murder on the Prowl; Cat on the Scent; Pawing Through the Past; Claws and Effect; Catch as Cat Can; The Tail of the Tip-Off; Whisker of Evil; Cat's Eyewitness; Sour Puss; Puss 'n Cahoots; The Purrfect Murder; Santa Clawed; Cat of the Century;" and "Hiss of Death, " in addition to "Sneaky Pie's Cookbook for Mystery Lovers."