The Adventurer's Guide to Treasure (and How to Steal It) (Hardcover) 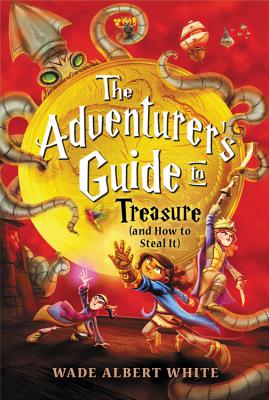 Fantasy gets a clever refresh in the final book of this witty, action-packed, and hilarious middle grade adventure trilogy.
At Saint Lupin's Completely Ordinary School Where Nothing Bizarre Ever Happens Most Especially Not Illegal Quests That Destroy Famous Landmarks, students are not taught about pirates. They're not taught how to identify them, how to befriend them, or even how to fight them...which leaves the school completely open to pirate invasion. And on the first day of classes, that's precisely what happens.

When a pirate captain and her crew steal an ancient Prophecy Medallion, Anne, Penelope, and Hiro are caught up in yet another adventure. After accidentally activating a quest, Anne and her friends have no choice but to complete the task and deliver the medallion to the supreme pirate ruler, Octo-Horse-Pirate. But the quest and the medallion are not what they seem, and Octo-Horse-Pirate is no run-of-the-mill villain. To complete the quest, Anne will have to uncover the truth about her mysterious past-and, just maybe, save the whole world in the process.

Filled to the brim with heart-pounding action, miniature dragons, attacking chickens, and (sometimes friendly) pirates, The Adventurer's Guide to Treasure (and How to Steal It) is a laugh-out-loud, fast-paced adventure that will leave you breathless.

Wade Albert White hails from Nova Scotia, Canada. In addition to writing the Adventurer's Guide series, Wade teaches part-time, dabbles in animation and filmmaking, and is a stay-at-home dad. He lives in Canada with his wife, sons, and cat.

Praise for The Adventurer's Guide to Treasure (and How to Steal It):
"This conclusion to Wade Albert White's delightfully inventive trilogy is witty, wise, and wonderful. As with the previous installments, this book offers readers a smart, sophisticated story that is filled with nonstop action and adventure, surprises at nearly every turn, and generous helpings of humour and heart...The resulting fantasy adventure flirts with familiar tropes while creating something that is utterly original, fresh and fun."—Atlantic Books Today

Praise for The Adventurer's Guide to Dragons (and Why They Keep Biting Me):
"Fans of the first will not be disappointed with this humorous sequel."
—Kirkus Reviews

Praise for The Adventurer's Guide to Successful Escapes:

"A highly distinctive, smart take on the fantasy novel... readers will find a humorous tale of adventure, friendship, and courage."—Kirkus Reviews

"This fast-paced adventure deals with deep themes... the first in a fantasy adventure series with a unique crew of characters, this will tickle funny bones and leave readers awaiting the next installment."—School Library Journal