Ask an Astronaut: My Guide to Life in Space (Hardcover) 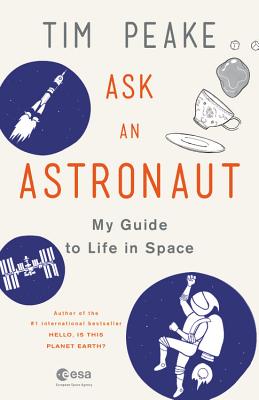 Was it fun to do a space walk? How squashed were you in the capsule on the way back? What were your feelings as you looked down on Earth for the first time? Were you ever scared? Where to next -- the Moon, Mars, or beyond?

Based on his historic mission to the International Space Station, Ask an Astronaut is Tim Peake's guide to life in space, and his answers to the thousands of questions he has been asked since his return to Earth. With explanations ranging from the mundane -- how do you wash your clothes or go to the bathroom while in orbit? -- to the profound -- what's the point? -- all written in Tim's characteristically warm style, Tim shares his thoughts on every aspect of space exploration.

From training for the mission to launch, to his historic spacewalk, to re-entry, he reveals for readers of all ages the cutting-edge science behind his groundbreaking experiments, and the wonders of daily life on board the International Space Station. The public was invited to submit questions using the hashtag #askanastronaut, and a selection are answered by Tim in the book, accompanied with illustrations, diagrams, and never-before-seen photos.

Tim Peake is a European Space Agency astronaut. He finished his 186-day mission on the International Space Station in June 2016. In addition to his illustrious career as an astronaut, Tim served as an officer in the British Army, and has logged more than 3,000 flight hours on over 30 different types of aircraft. He enjoys skiiing, scuba diving, cross-country running, climbing, mountaineering, and completed the London Marathon in 2006 (before he completed it again while in space). He has two sons.