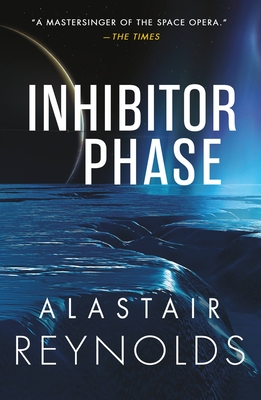 A stellar new science fiction adventure from the author who redefined space opera, set in his bestselling Revelation Space universe. For thirty years a tiny band of humans has been sheltering in the caverns of an airless, crater-pocked world called Michaelmas. Beyond their solar system lie the ruins of human interstellar civilization, stalked by a ruthless, infinitely patient cybernetic entity determined to root out the last few bands of survivors. One man has guided the people of Michaelmas through the hardest of times, and given them hope against the wolves: Miguel de Ruyter. When a lone human ship blunders into their system, and threatens to lead the wolves to Michaelmas, de Ruyter embarks on a desperate, near-suicide mission to prevent catastrophe. But an encounter with a refugee from the ship—the enigmatic woman who calls herself only Glass—leads to de Ruyter's world being turned upside down.

Alastair Reynolds was born in Barry, South Wales, in 1966. He studied at Newcastle and St. Andrews Universities and has a Ph.D. in astronomy. He stopped working as an astrophysicist for the European Space Agency to become a full-time writer. Revelation Space and Pushing Ice were shortlisted for the Arthur C. Clarke Award; Revelation Space, Absolution Gap, Diamond Dogs, and Century Rain were shortlisted for the British Science Fiction Award, and Chasm City won the British Science Fiction Award.

"This wonderfully complicated, fascinating space opera carries on the adventures of teen sisters Adrana and Arafura Ness, who find themselves over their heads in deep space intrigue... [A] marvelous mix of character study and space adventure."—Publishers Weekly (starred review) on Shadow Captain

"Shadow Captain does what a great sequel should do: it builds upon, rather than replicates, the earlier work while escalating the drama and upping the stakes. ... The worlds'-shattering conclusion has us very much looking forward to our next voyage with the Ness sisters."—B&N Sci-Fi and Fantasy Blog on Shadow Captain

"The sequel to last year's space heist story, Revenger, is an equally-gripping story about two sisters, Adrana and Fura Ness, on the hunt for the greatest treasure in the universe."—Kirkus on Shadow Captain

"A swashbuckling thriller--Pirates of the Caribbean meets Firefly--that nevertheless combines the author's trademark hard SF with effective, coming-of-age characterization."
—The Guardian on Revenger

"Revenger is classic Reynolds-that is to say, top of the line science fiction, where characters are matched beautifully with ideas and have to find their place in a complex future. More!"—Greg Bear on Revenger

"Alastair Reynolds [is] one of the leading lights of the New Space Opera Movement . . . . Revenger is tremendous fun." —Locus

"Reynolds has sketched in a galaxy littered with the relics of former civilizations (human and alien), with plenty left to the reader's imagination, and room for a sequel."—Library Journal on Revenger

"An expert mix of the fantastical and horrific."—Publishers Weekly (starred review) on Revenger

"By far the most enjoyable book Reynolds has ever written."—SFX on Revenger