How Things Work: The Inner Life of Everyday Machines (Hardcover) 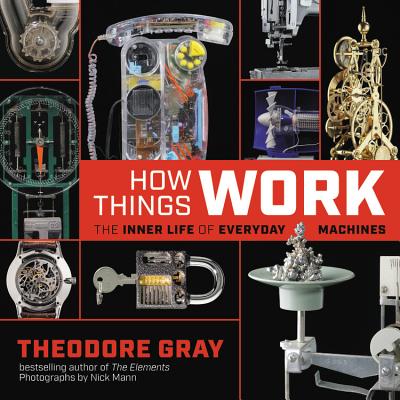 By Theodore Gray, Nick Mann (Photographs by)
$29.99
On Our Shelves Now

Million-copy bestselling author of The Elements, Molecules, and Reactions Theodore Gray applies his trademark mix of engaging stories, real-time experiments, and stunning photography to the inner workings of machines, big and small, revealing the extraordinary science, beauty, and rich history of everyday things.
Theodore Gray has become a household name among fans, both young and old, of popular science and mechanics. He's an incorrigible tinkerer with a constant curiosity for how things work. Gray's readers love how he always brings the perfect combination of know-how, humor, and daring-do to every project or demonstration, be it scientific or mechanical.
In How Things Work he explores the mechanical underpinnings of dozens of types of machines and mechanisms, from the cotton gin to the wristwatch to an industrial loom. Filled with stunning original photographs in Gray's inimitable style, How Things Work is a must-have exploration of stuff--large and small--for any builder, maker or lover of mechanical things.

Theodore Gray is the author of The Elements, Molecules, and Reactions, as well as Theodore Gray's Completely Mad Science. He is the creator of the bestselling iPad apps "Elements" and "Molecules," which have both been named "App of the Week" by Apple and was Director of "Disney Animated" (also honored by Apple as "iPad App of the Year"). Gray appeared on stage with Steve Jobs several times in his capacity as a software creator. He also co-founded Wolfram Research, Inc., makers of the widely-used software Mathematica and the Wolfram Alpha website. He lives in Urbana, Illinois.
Nick Mann is a photographer specializing in taking beautiful photos of inanimate objects on black backgrounds. His other work includes The Elements, Molecules, and Reactions. Originally of Urbana, IL, he lives in Champaign, IL and North Liberty, IA, where he is working towards a geology degree at Cornell College.

"A stunning coffee-table book with detailed photos. [Author] Theodore Gray explores how everyday things work in great detail, going so far as to build some of them himself, and provides a new perspective on these objects that most of us would never have unless we knew them intimately...What Gray did in his previous books about elements, molecules, and reactions, he has now done for the mechanical systems that run our world, and the result is a beautiful appreciation for systems we all often overlook."—Ars Technica