The Upstarts: How Uber, Airbnb, and the Killer Companies of the New Silicon Valley Are Changing the World (Hardcover) 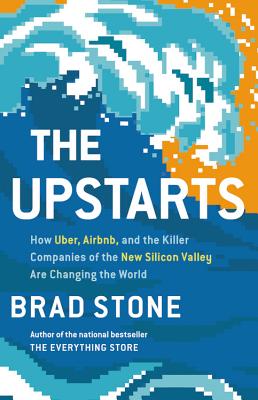 A look deep inside the new Silicon Valley, from the New York Times bestselling author of The Everything Store.

In the spirit of iconic Silicon Valley renegades like Steve Jobs and Bill Gates, another generation of entrepreneurs is using technology to upend convention and disrupt entire industries. These are the upstarts, idiosyncratic founders with limitless drive and an abundance of self-confidence. Led by such visionaries as Travis Kalanick of Uber and Brian Chesky of Airbnb, they are rewriting the rules of business and often sidestepping serious ethical and legal obstacles in the process.

The Upstarts is the definitive story of two new titans of business and a dawning age of tenacity, conflict and wealth. In Brad Stone's riveting account of the most radical companies of the new Silicon Valley, we discover how it all happened and what it took to change the world.

Brad Stone is senior executive editor of global technology at Bloomberg News and the author of the New York Times bestseller The Everything Store: Jeff Bezos and the Age of Amazon. He has covered Silicon Valley for more than 15 years and lives in San Francisco.

Praise for The Upstarts

One of Amazon's Top Ten Books of February 2017

"Brad Stone's The Upstarts reads like a detective story: A page turning who-did-it on the creation of billion dollar fortunes and the ruthless murder of traditional businesses. No single book will tell you more about what life feels like inside companies like Airbnb and Uber as they grow from mere ideas into merciless machines for innovation, riches and unease. The sweat. The stress. The power highs of new instant fortunes. It's all here. You won't be able to put The Upstarts down. And when you finally do, you'll look at your own company and career in a totally fresh way."—Joshua Cooper Ramo, author of The Seventh Sense

"In The Upstarts, Brad Stone has vividly captured the cultural and economic upheaval brought about by the latest generation of Internet superpowers. His book is a magnificent expose of how companies like Uber and Airbnb came to be, the people that profited and lost out along the way and the ramifications that this technology will have on the world for decades to come. Stone remains the preeminent chronicler of the Internet Age and a master story teller."—Ashlee Vance, author of Elon Musk

"Brad Stone gives us a lively, fascinating picture of the new new thing in technology - startups like Uber and Airbnb that are disrupting old businesses across the world. He provides a much needed glimpse into the companies that fail as well as the ones that make it big. And he points to the broad policy issues raised by these new technologies, which are surely no fun for the people whose lives are being disrupted."
—Fareed Zakaria, author of The Post-American World and host of CNN's "Fareed Zakaria GPS"

"With precision, wit, and insight, Brad Stone tells the tale of two very different CEOs whose skills, innovations and willingness to pursue a totally crazy idea toppled two very different industries. No one in business today can afford to miss this compelling tale of trust, technology, and very big piles of loot."
—Steven Levy, author of In the Plex: How Google Thinks, Works, and Shapes Our Lives

"Over the last few years, Silicon Valley has become the new Wall Street. Brad Stone introduces us to the new tech Masters of the Universe, a collection of characters that are just as insatiable as the robber barons of finance, and even more entertaining."
—Rana Faroohar, author of Makers and Takers

"Stone (The Everything Store) turns his attention to the sharing economy in this dual portrait of two of the fastest growing startups...At both Uber, the ride-sharing app, and Airbnb, the homestay rental platform, Stone finds commonality among the CEOs, who lead their respective companies with an idealistic vision and aggressive business practices... Solid and the sheer magnitude of the book's subjects demands attention."—Publishers Weekly

"A fun, briskly told narrative... 'The Upstarts' is not the end of the story but an excellent history of the beginning."
—Alex Tabarrok, Wall Street Journal

"Stone brings a big dose of truth serum to the marvels and machinations of the sharing economy and its founders.... 'The Upstarts' is rich with inside details"
—George Anders, Forbes

"Technology writer Brad Stone chronicles [Uber and Airbnb's] swift rise to the corporate stratosphere, juxtaposing visionary zeal with the often deep impacts they've left in their wakes... The book is a timely reminder that pushing the digital realm into the physical can disrupt communities as well as the competition."
—Nature Magazine

"The most detailed investigation yet into the early years of these Silicon Valley prodigies... an entertaining and well-crafted account."
—Leslie Hook, Financial Times

"With a detailed and revealing account of the companies' rise and commentary on why they succeeded in the way they did, Brad Stone's newest read is interesting, informed and oh-so-timely."
—Ashley Macey, Brit + Co

"The Upstarts is a testament to grit-lots and lots of it-and, yes, luck. It's quite a good read."—Brenda Jubin, Investing.com

"[Stone] amply illustrates that for every tech champion, there is a forgotten crowd of decapitated competitors, pissed-off investors, defenestrated founders and unrewarded early employees... where Stone really succeeds is in providing the reader with the visceral experience of the start-up enterprise."
—Antonio Garcia-Martinez, Washington Post

"A fascinating account of the founders and leaders of each company, each of whom have molded the companies into their own images in many ways... [Stone's] telling is especially artful. These books are great primers for aspiring entrepreneurs as well as those who are simply interested in what makes entrepreneurs successful."
—Peter High, Forbes

"A penetrating study marked by the same thorough reporting that distinguished [The Everything Store]. No figure is too obscure in the annals of Uber and Airbnb for Stone to track down, including the poignant stories of sundry entrepreneurs who converged on similar ideas but, amid various missteps, failed to find traction."—Stephen Phillips, San Francisco Chronicle

"Terrific... What is great about The Upstarts is that in learning the history of Uber and Airbnb, we learn that the founders of these companies had little idea about the eventual impact of their business models."—Joshua Kim, Inside Higher Education

"This book is less about our (at times) unhealthy relationship with technology, and more about the impact technology has had on our economy, our communities, and most of all, our trust in one another."
—Nicolas Cole, Inc.

Praise for The Everything Store

SELECTED AS A BEST BOOK OF THE YEAR BY THE WASHINGTON POST, FORBES, THE NEW REPUBLIC, THE ECONOMIST, BLOOMBERG, AND GIZMODO, AND AS ONE OF THE TOP 10 INVESTIGATIVE JOURNALISM BOOKS OF 2013 BY NIEMAN REPORTS

"Mr. Stone tells this story with authority and verve, and lots of well-informed reporting.... A dynamic portrait of the driven and demanding Mr. Bezos."—Michiko Kakutani, New York Times

"Jeff Bezos is one of the most visionary, focused, and tenacious innovators of our era, and like Steve Jobs he transforms and invents industries. Brad Stone captures his passion and brilliance in this well-reported and compelling narrative."
—Walter Isaacson, author of Steve Jobs

"A deeply reported and deftly written book.... Like Steven Levy's "In the Plex: How Google Thinks, Works, and Shapes Our Lives," and "Gates: How Microsoft's Mogul Reinvented an Industry -- and Made Himself the Richest Man in America" by Stephen Manes and Paul Andrews, it is the definitive account of how a tech icon came to life."
—Seattle Times

"Stone's book, at last, gives us a Bezos biography that can fit proudly on a shelf next to the best chronicles of America's other landmark capitalists."
—Forbes