By Ann Leckie
$16.99
In Stock Now - Click Title to See Store Inventory. Please allow up to 48-hours for Curbside Pickup orders to be processed.

This is book number 1 in the Imperial Radch series. 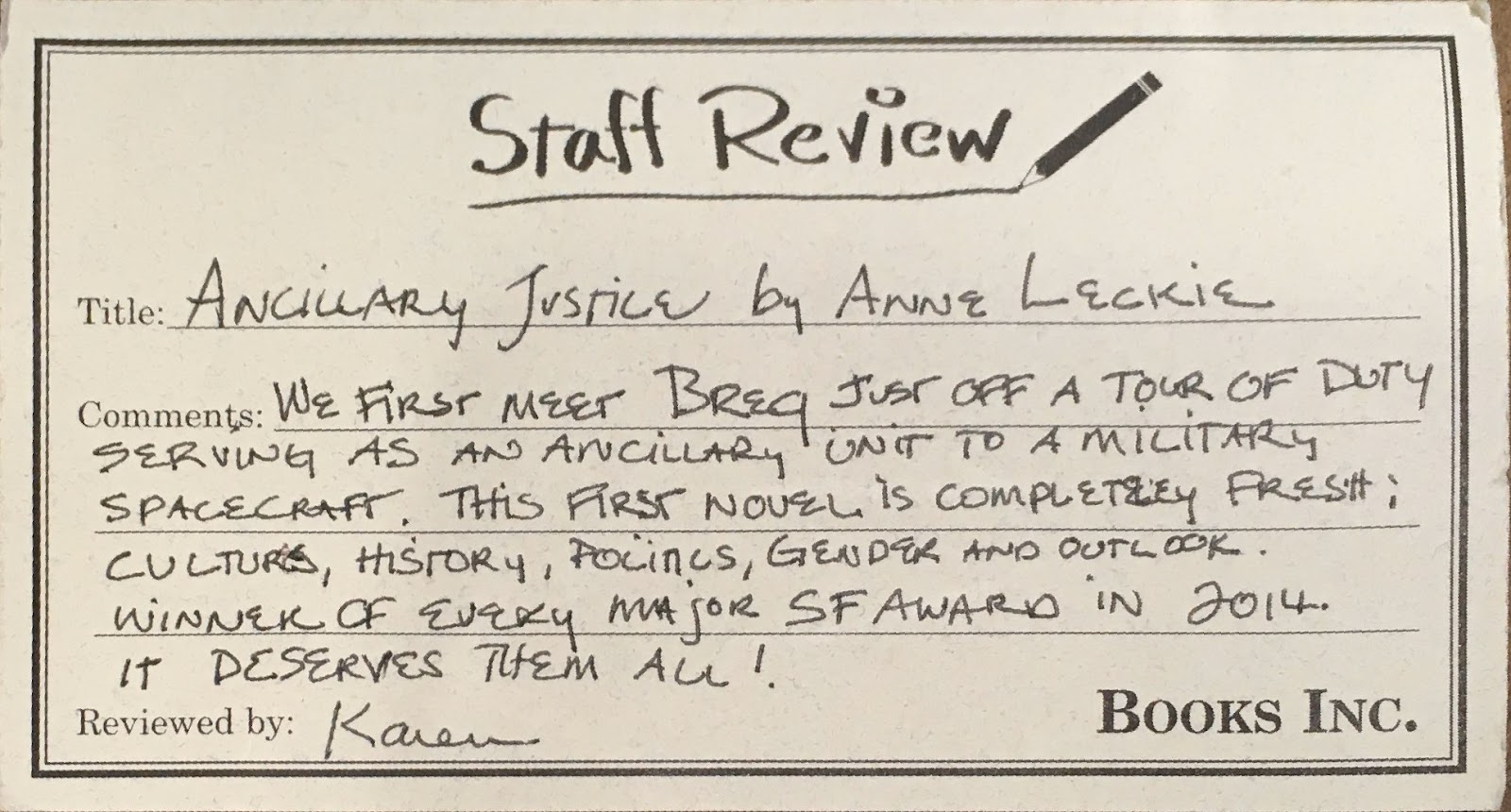 We first meet Breq just off a tour of duty serving as an Ancillary unit to a military spacecraft. This first novel is completely fresh; culture, history, politics, gender and outlook. Winner of every major SF award in 2014. It deserves them all!

WINNER OF THE HUGO, NEBULA, AND ARTHUR C. CLARKE AWARDS

The record-breaking debut novel that won every major science fiction award, Ancillary Justice is Ann Leckie's powerful and thought provoking story of a warship trapped in a human body and her search for revenge. A must read for fans of Ursula K. Le Guin and James S. A. Corey.

On a remote, icy planet, the soldier known as Breq is drawing closer to completing her quest.

Once, she was the Justice of Toren—a colossal starship with an artificial intelligence linking thousands of soldiers in the service of the Radch, the empire that conquered the galaxy.

Now, an act of treachery has ripped it all away, leaving her with one fragile human body, unanswered questions, and a burning desire for vengeance.

"ESTABLISHES LECKIE AS AN HEIR TO BANKS." —Elizabeth Bear

Ann Leckie is the author of the Hugo, Nebula, Arthur C. Clarke, and British Science Fiction Award-winning novel Ancillary Justice. She has worked as a waitress, a receptionist, a rodman on a land-surveying crew, and a recording engineer. She lives in St. Louis, Missouri.

"Ancillary Justice is the mind-blowing space opera you've been needing...This is a novel that will thrill you like the page-turner it is, but stick with you for a long time afterward."—io9.com (included in 'This Fall's Must-Read Science Fiction and Fantasy Books')

"It's not every day a debut novel by an author you'd never heard of before derails your entire afternoon with its brilliance. But when my review copy of Ancillary Justice arrived, that's exactly what it did. In fact, it arrowed upward to reach a pretty high position on my list of best space opera novels ever."—Liz Bourke

"Establishes Leckie as an heir to Banks and Cherryh."—Elizabeth Bear

"A double-threaded narrative proves seductive, drawing the reader into the naive but determined protagonist's efforts to transform an unjust universe. Leckie uses...an expansionist galaxy-spinning empire [and] a protagonist on a single-minded quest for justice to transcend space-opera conventions in innovative ways. This impressive debut succeeds in making Breq a protagonist readers will invest in, and establishes Leckie as a talent to watch."—Publishers Weekly

"Leckie does a very good job of setting this complex equation up... This is an altogether promising debut."—Kirkus

"Using the format of SF military adventure blended with hints of space opera, Leckie explores the expanded meaning of human nature and the uneasy balance between individuality and membership in a group identity. Leckie is a newcomer to watch as she expands on the history and future of her new and exciting universe."—Library Journal

"A sharply written space opera with a richly imagined sense of detail and place, this debut novel from Ann Leckie works as both an evocative science fiction tale and an involving character study...it's also a strongly female-driven piece, tackling ideas about politics and gender in a way that's both engaging and provocative...Ancillary Justice is a gripping read that's well worth a look."—SFX (UK)

"It engages, it excites, and it challenges the way the reader views our
world. Leckie may be a former Secretary of the Science Fiction Writers
of America, but she's the President of this year's crop of debut
novelists. Ancillary Justice might be the best science fiction novel of
this very young decade."—Justin Landon Staffer's Book Review

"Total gamechanger. Get it, read it, wish to hell you'd written it. Ann
Leckie's Ancillary Justice may well be the most important book Orbit
have published in ages."—Paul Graham Raven

"The sort of book that the Clarke Award wishes it had last year ... be
prepared to see Ancillary Justice bandied around a lot come awards
season. (As it should be)."—Jared Shurin Pornokitsch

"If you don't know the Ancillary series by now, you probably should. Ann Leckie's sociopolitical space opera almost singlehandedly breathed new cool into the stereotype of spaceships trundling through far-off systems amid laser battles. ... [Ancillary Mercy] earns the credit it's received: As a capstone to a series that shook genre expectations, as our closing installment of an immersively realized world, and as the poignant story of a ship that learned to sing."—NPR Books on Ancillary Mercy