The Outcasts: A Novel (Paperback) 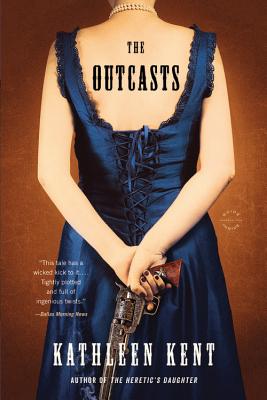 A taut, thrilling adventure story about buried treasure, a manhunt, and a woman determined to make a new life for herself in the old west.

It's the 19th century on the Gulf Coast, a time of opportunity and lawlessness. After escaping the Texas brothel where she'd been a virtual prisoner, Lucinda Carter heads for Middle Bayou to meet her lover, who has a plan to make them both rich, chasing rumors of a pirate's buried treasure.

Meanwhile, Nate Cannon, a young Texas policeman with a pure heart and a strong sense of justice, is on the hunt for a ruthless killer named McGill who has claimed the lives of men, women, and even children across the frontier.

Who -- if anyone -- will survive when their paths finally cross? As Lucinda and Nate's stories converge, guns are drawn, debts are paid, and Kathleen Kent delivers an unforgettable portrait of a woman who will stop at nothing to make a new life for herself.

Kathleen Kent is the author of the Edgar Award-nominated The Dime, as well as the bestselling historical novels The Heretic's Daughter, The Traitor's Wife, and The Outcasts. Kent lives in Dallas, TX.

PRAISE FOR THE OUTCASTS:

"THE OUTCASTS is well-written, tightly plotted and full of ingenious twists....Like the rotgut poured at some dusty Old West saloon, this tale has a wicked kick to it."—Shawna Seed, Dallas Morning News

"A cinematic but refreshingly unsentimental take on the classic Western, starring a woman who is no romantic heroine, but a definite survivor."
—Kirkus Reviews (Starred Review)

"[A] mastery of historical fiction."
—Diana Andro, The Fort Worth Star-Telegram