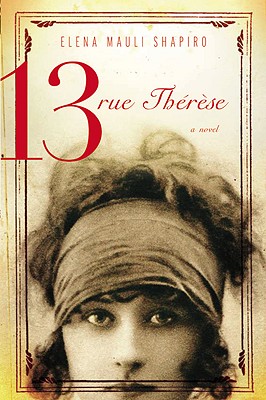 American academic Trevor Stratton discovers a box full of artifacts from World War I as he settles into his new office in Paris. The pictures, letters, and objects in the box relate to the life of Louise Brunet, a feisty, charming Frenchwoman who lived through both World Wars.

As Trevor examines and documents the relics the box offers up, he begins to imagine the story of Louise Brunet's life: her love for a cousin who died in the war, her marriage to a man who works for her father, and her attraction to a neighbor in her building at 13 rue Thérèse. The more time he spends with the objects though, the truer his imaginings of Louise's life become, and the more he notices another alluring Frenchwoman: Josianne, his clerk, who planted the box in his office in the first place, and with whom he finds he is falling in love.

Elena Shapiro was born and raised in Paris. She holds a BA in English from Stanford University, an MFA in fiction from Mills College, and an MA in comparative literature from the University of California, Davis. She lives in the Bay Area with her husband.

"13, rue Thérèse is a puzzle-novel and gave me the same fizzy satisfaction as completing a Sunday crossword. It will light up your brain and your heart."—David Ebershoff, bestselling author of The 19th Wife and The Danish Girl

"Shapiro's debut, an imaginative, sensual rendering of a Parisian woman's life, is told through the voice of Trevor Stratton, a young American scholar and translator working at a university in Paris. Stratton finds a box filled with objects dating back to WWI that once belonged to Louise Brunet, and his fascination with the box's contents-postcards, handkerchiefs, love letters, and other vintage keepsakes-leads him to imagine what Brunet's life in Paris might have been. What Stratton isn't aware of at first is that the box was left for him by Josianne, a secretary at the university, who is using the box and its contents to measure Stratton's romantic worthiness. As Stratton unfolds Brunet's story against the background of WWI battlefields and several inventions-a lover, Camille Victor, who dies in battle; a resulting unhappy marriage to husband Henri; and a passionate affair with a married neighbor, Xavier Langlais-he gradually comes to realize that Josianne is the source of his archival inspiration. The book is illustrated with photos of the actual objects owned by Shapiro, cleverly used as the novel's framing device."
—Publishers Weekly