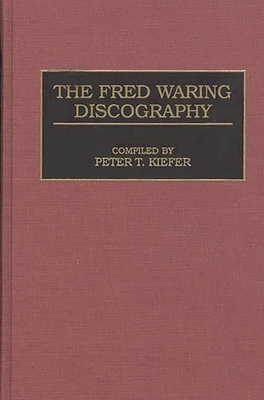 Fred Waring and the Pennsylvanians entertained America for 69 years. They were successful pioneers in many aspects of the entertainment business: stage shows, radio, television, movies, concerts, and recordings. Waring and his group made over a thousand commerical recordings starting in 1923 for the Victor Talking Machine Company and then continued with Decca Records, Capitol, Reprise, and Mega labels. This discography documents each one of the recordings as well as the transcriptions that the Pennsylvanians recorded for various program services. It is an invaluable research resource for record historians, researchers, and recording collectors.

In addition to the detailed alphabetical listing of all song recordings, the book also supplies a chronological list of each recording session and the songs recorded on that day; a list of arrangers' names and the songs for which they wrote the arrangements; a complete album listing; and a listing of all known commercial transcription recordings. This is the only complete discography available on the subject.

PETER T. KIEFER is Coordinator of Fred Waring's America, a Special Collection of the Pennsylvania State University Libraries. He has been associated with Fred Waring for over 30 years. He is an accomplished sound and recording engineer and was Director of the Fred Waring Music Workshops for 15 years as well as company manager for the Fred Waring Show.