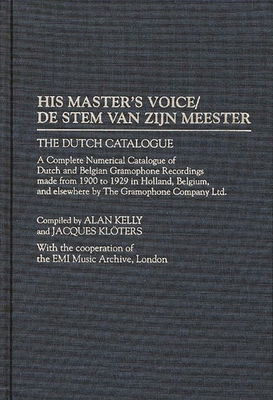 By Alan Kelly, Jacques Kloters
This Book Is Not Sold Online - Inquire In Store

The fourth volume in the Greenwood series providing a near-definitive survey on the output of sound recordings made in Europe by The Gramophone Company (1900-1929), this work covers the Dutch area and includes a good deal of Belgian material as well. Included in the contents are examples of the work from serious artists in classical music together with popular and comic songs and social comment dealing with an era that has nearly passed out of the range of living memory. Of interest to record collectors, music archivists, reference librarians, and music and social historians.

The Gramophone Company was the major producer of sound recordings from 1900 to 1929, besides having a virtual monopoly of the major talents. It was organized into ten geographical/ethnic divisions. Four of these areas have had discographies published on them; Kelly's previous Greenwood volumes cover Italy, France, and Germany. The fourth, on Scandinavia, was published by another company.