Comic Books and Comic Strips in the United States: An International Bibliography (Bibliographies and Indexes in Popular Culture #4) (Hardcover) 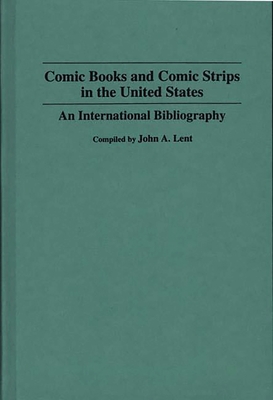 This is book number 4 in the Bibliographies and Indexes in Popular Culture series.

Comics have become icons of U.S. popular culture familiar throughout the world. This huge bibliography, one of four compiled by Lent to cover all parts of the world, cites many publications in various writing styles, formats, time periods, and languages. This volume is introduced by famed cartoonists Mort Walker (Beetle Bailey) and Jerry Robinson (The Joker). The genres of comic art have had a phenomenal growth in recent years; the literature has grown with these developments, making this volume of interest to scholars of popular culture and fans alike.

Featured are sections on resources, including an annotated directory of 128 comic art-related periodicals; comics collecting; portrayals of comics in movies, television, and radio; and relationships of comics with art, education and children, eroticism, ethnicity, humanism, the professions, violence, and war. Other parts deal with historical, business, legal, and technical aspects of comics. Two hundred and ninety-one comics-related personnel are singled out for special consideration, as well as 143 individual comic strip characters and 48 comic book titles under 13 genres. The foreword by Mort Walker deals with comics over the years and the topic of political correctness, and the introduction by Jerry Robinson gives a history of comic art. The indices are conveniently divided by authors, cartoonists, characters and titles, periodicals, and subjects. The other three books in this international series cover animation, caricature, gag, magazine, illustrative, and political cartoons in the United States and Canada; comic art of Europe; and comic art of Africa, Asia, Australia and Oceania, and Latin America and the Caribbean.