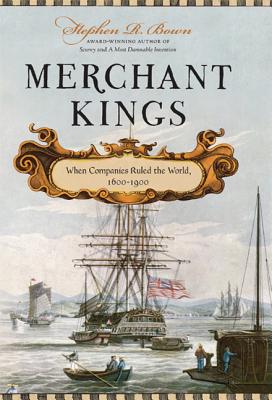 It was an era when monopoly trading companies were the unofficial agents of European expansion, controlling vast numbers of people and huge tracts of land, and taking on governmental and military functions. They managed their territories as business interests, treating their subjects as employees, customers, or competitors. The leaders of these trading enterprises exercised virtually unaccountable, dictatorial political power over millions of people.

The merchant kings of the Age of Heroic Commerce were a rogue's gallery of larger-than-life men who, for a couple hundred years, expanded their far-flung commercial enterprises over a sizable portion of the world. They include Jan Pieterszoon Coen, the violent and autocratic pioneer of the Dutch East India Company; Peter Stuyvesant, the one-legged governor of the Dutch West India Company, whose narrow-minded approach lost Manhattan to the British; Robert Clive, who rose from company clerk to become head of the British East India Company and one of the wealthiest men in Britain; Alexandr Baranov of the Russian American Company; Cecil Rhodes, founder of De Beers and Rhodesia; and George Simpson, the "Little Emperor" of the Hudson's Bay Company, who was chauffeured about his vast fur domain in a giant canoe, exhorting his voyageurs to paddle harder so he could set speed records.
Merchant Kings looks at the rise and fall of company rule in the centuries before colonialism, when nations belatedly assumed responsibility for their commercial enterprises. A blend of biography, corporate history, and colonial history, this book offers a panoramic, new perspective on the enormous cultural, political, and social legacies, good and bad, of this first period of unfettered globalization.

Stephen R. Bown has been writing about adventurers, travelers, and explorers for many years. He is the author of 1494: How a Family Feud in Medieval Spain Divided the world in Half; Madness, Betrayal and the Lash; Scurvy; A Most Damnable Invention; and Merchant Kings. He lives in the Canadian Rockies with his wife and two children.

“A masterful read.” —The Washington Times

“Engagingly written and refreshingly conversational, Merchant Kings brings a cohesion to such a large and unwieldy historical period, a period that both led directly to, and remains an integral part of, so many contemporary economic and political struggles. And he does so commendably.” —The Post and Courier

“A chronicle perfectly relevant to our own time--and ultimately shows us that a market is free only when those who live and consume within it are protected from the powerful.” —New York Journal of Books

“[Merchant Kings] offers an easily digestible overview of the period and its major figures.” —The New York Times

“Bown ably deploys biography to present the successes, costs, and legacies of an era's commingling of private money and state sovereignty.” —Booklist

“Bown has produced a magnificent description of the six great companies, and their leaders, that dominated the 'Heroic Age of Commerce.' ... Bown presents a fascinating look at the men who exploited resources and native peoples while laying the foundations of empires. 'Neither heroes nor angels,' Bown says, their global impact was as great as that of any king.” —Publishers Weekly (starred review)

“Bown's well-researched text brings these remarkable men to life, his eye for detail and infectious passion transporting readers through this passage in history. Battles and brawls, ruthless vision, despair, folly, grandeur are all woven into an exciting and gripping tale of men who would 'command the riches of the world, and consequently the world itself'. An excellent historical study and a very engaging read.” —Liverpool Daily Post

“Stephen Bown has ingeniously whittled this multinational history down to vignettes of six of its more notorious figures. . . . These characters are as familiar to us as evil storybook characters, yet as foreign to contemporary business standards as Genghis Khan.” —Timothy Brook, author of Vermeer’s Hat on Merchant Kings

“Stephen Bown tells a fascinating story, one that provides a very different perspective on the colonial period than that which is to be gleaned from the usual grocery list of significant events.” —The Right Honourable Paul Martin, former prime minister of Canada, on Merchant Kings

“[Bown]'s particularly good at penning provocative theories that link seemingly modest events to monumental changes in the course of history. . . . Bown also has a good eye for the unintended consequences, ironies, and contradictions that are the product of social and technological forces of great magnitude.” —Publishers Weekly on A Most Damnable Invention

“A spirited, stimulating account of how the cure for the feared disease was found, lost, and found again. Splendid, popular history.” —Kirkus Reviews on Scurvy