Whose Freedom?: The Battle over America's Most Important Idea (Paperback) 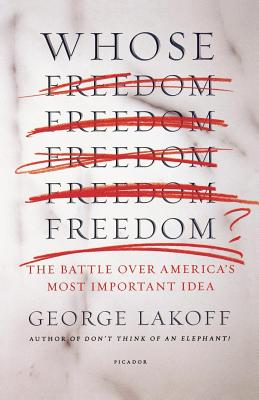 Since September 11, 2001, the Bush administration has relentlessly invoked the word "freedom." Al-Qaeda attacked us because "they hate our freedom." The U.S. can strike preemptively because "freedom is on the march." Social security should be privatized in order to protect individual freedoms. The 2005 presidential inaugural speech was a kind of crescendo: the words "freedom," "free," and "liberty," were used forty-nine times in President Bush's twenty-minute speech.

In Whose Freedom?, Lakoff surveys the political landscape and offers an essential map of the Republican battle plan that has captured the hearts and minds of Americans--and shows how progressives can fight to reinvigorate this most beloved of American political ideas.

George Lakoff is the author of Don't Think of an Elephant and Moral Politics, as well as many seminal books on linguistics. He lives and teaches in Berkeley, California.

“One of the most influential political thinkers of the progressive movement.” —Howard Dean

“In the battle of ideas, George Lakoff is one of the progressive movement's Five-Star Generals. Here he shows what we must do to take back precious ground lost to the Right--the concept of 'freedom,' on which America's very foundation is built. Read this and arm yourself.” —Robert B. Reich, former U.S. Secretary of Labor

“[Lakoff] makes a very persuasive argument that Democrats have allowed Republicans to hijack words such as 'freedom' and 'liberty' in fundamental ways that have undercut Democrats' credibility.” —Chicago Tribune