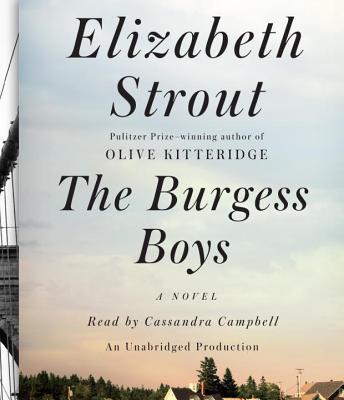 By Elizabeth Strout, Cassandra Campbell (Read by)
This Book Is Not Sold Online - Inquire In Store
Hard to Find

Elizabeth Strout "animates the ordinary with an astonishing force," wrote The New Yorker on the publication of her Pulitzer Prize-winning Olive Kitteridge. The San Francisco Chronicle praised Strout's "magnificent gift for humanizing characters." Now the acclaimed author returns with a stunning novel as powerful and moving as any work in contemporary literature. Haunted by the freak accident that killed their father when they were children, Jim and Bob Burgess escaped from their Maine hometown of Shirley Falls for New York City as soon as they possibly could. Jim, a sleek, successful corporate lawyer, has belittled his bighearted brother their whole lives, and Bob, a Legal Aid attorney who idolizes Jim, has always taken it in stride. But their long-standing dynamic is upended when their sister, Susan--the Burgess sibling who stayed behind--urgently calls them home. Her lonely teenage son, Zach, has gotten himself into a world of trouble, and Susan desperately needs their help. And so the Burgess brothers return to the landscape of their childhood, where the long-buried tensions that have shaped and shadowed their relationship begin to surface in unexpected ways that will change them forever. With a rare combination of brilliant storytelling, exquisite prose, and remarkable insight into character, The Burgess Boys is Elizabeth Strout's newest and perhaps most astonishing work of literary art. Praise for Elizabeth Strout's Pulitzer Prize-winning Olive Kitteridge

"Perceptive, deeply empathetic . . . Olive is the axis around which these thirteen complex, relentlessly human narratives spin themselves into Elizabeth Strout's unforgettable novel in stories."--O: The Oprah Magazine

"Funny, wicked and remorseful, Mrs. Kitteridge is a compelling life force, a red-blooded original. When she's not onstage, we look forward to her return. The book is a page-turner because of her."--San Francisco Chronicle

Elizabeth Strout is the author of Olive Kitteridge, winner of the Pulitzer Prize; Abide with Me, a national bestseller and Book Sense pick; and Amy and Isabelle, winner of the Los Angeles Times Art Seidenbaum Award for First Fiction and the Chicago Tribune Heartland Prize. She has also been a finalist for the PEN/Faulkner Award and the Orange Prize in England. Her short stories have been published in a number of magazines, including The New Yorker and O: The Oprah Magazine. She lives in New York City.

“Strout’s greatest gift as a writer, outside a diamond-sharp precision that packs 320 fast-paced pages full of insight, is her ability to let the reader in on all the rancor of her characters without making any of them truly detestable. . . . Strout creates a portrait of an American community in turmoil that’s as ambitious as Philip Roth’s American Pastoral but more intimate in tone.”—Time

“[Strout] is at her masterful best when conjuring the two Burgess boys. . . . Scenes between them ring so true.”—San Francisco Chronicle

“No one should be surprised by the poignancy and emotional vigor of Elizabeth Strout’s new novel. But the broad social and political range of The Burgess Boys shows just how impressively this extraordinary writer continues to develop.”—The Washington Post

“What truly makes Strout exceptional—and her latest supple and penetrating novel so profoundly affecting—is the perfect balance she achieves between the tides of story and depths of feeling. . . . Every element in Strout’s graceful, many-faceted novel is keenly observed, lustrously imagined and trenchantly interpreted.”—Chicago Tribune

“Strout deftly exposes the tensions that fester among families. But she also takes a broader view, probing cultural divides. . . . Illustrating the power of roots, Strout assures us we can go home again—though we may not want to.”—O: The Oprah Magazine

“Reading an Elizabeth Strout novel is like peering into your neighbor’s windows. . . . There is a nuanced tension in the novel, evoked by beautiful and detailed writing. Strout’s manifestations of envy, pride, guilt, selflessness, bigotry and love are subtle and spot-on.”—Minneapolis Star Tribune

“Strout conveys what it feels like to be an outsider very well, whether she’s delving into the quiet inner lives of Somalis in Shirley Falls or showing how the Burgess kids got so alienated from one another. But the details are so keenly observed, you can connect with the characters despite their apparent isolation. . . . [A] gracefully written novel. [Grade:] A.”—Entertainment Weekly

“With her signature lack of sentimentality, a boatload of clear-eyed compassion and a penetrating prose style that makes the novel riveting, Strout tells the story of one Maine family, transformed. Again and again, she identifies precisely the most complex of filial emotions while illuminating our relationships to the larger families we all belong to: a region, a city, America and the world.”—More

“The Burgess Boys returns to coastal Maine [with] a grand unifying plot, all twists and damage and dark, morally complex revelations. . . . The grand scale suits Strout, who now adds impresario storytelling at book length to the Down East gift for plainspoken wisdom.”—Town & Country