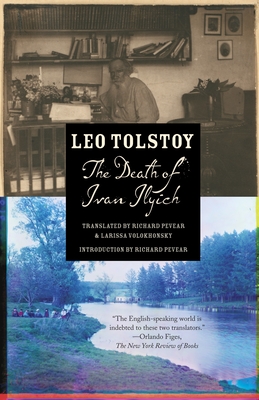 Tolstoy’s most famous novella is an intense and moving examination of death and the possibilities of redemption, here in a powerful translation by the award-winning Richard Pevear and Larissa Volokhonsky.

Ivan Ilyich is a middle-aged man who has spent his life focused on his career as a bureaucrat and emotionally detached from his wife and children. After an accident he finds himself on the brink of an untimely death, which he sees as a terrible injustice. Face to face with his mortality, Ivan begins to question everything he has believed about the meaning of life. The Death of Ivan Ilyich is a masterpiece of psychological realism and philosophical profundity that has inspired generations of readers.

Count Leo Tolstoy (1828–1910) was born in central Russia. After serving in the Crimean War, he retired to his estate and devoted himself to writing, farming, and raising his large family. His novels and outspoken social polemics brought him world fame.

Richard Pevear has published translations of Alain, Yves Bonnefoy, Alberto Savinio, Pavel Florensky, and Henri Volohonsky, as well as two books of poetry. He has received fellowships or grants for translation from the National Endowment for the Arts, the Ingram Merrill Foundation, the Guggenheim Foundation, the National Endowment for the Humanities, and the French Ministry of Culture. Larissa Volokhonsky was born in Leningrad. She has translated works by the prominent Orthodox theologians Alexander Schmemann and John Meyendorff into Russian.

Together, Pevear and Volokhonsky have translated Dead Souls and The Collected Tales by Nikolai Gogol, The Complete Short Novels of Chekhov, and The Brothers Karamazov, Crime and Punishment, Notes from Underground, Demons, The Idiot, and The Adolescent by Fyodor Dostoevsky. They were twice awarded the PEN Book-of-the-Month Club Translation Prize (for their version of Dostoevsky's The Brothers Karamazov and for Tolstoy's Anna Karenina), and their translation of Dostoevsky's Demons was one of three nominees for the same prize. They are married and live in France.

“The English-speaking world is indebted to these two translators.” —Orlando Figes, The New York Review of Books

“Excellent. . . . The duo has managed to convey the rather simple elegance of Tolstoy’s prose.” —The New Criterion

“Well translated. As a lover of Tolstoy’s work, one couldn’t ask for more, and I can’t recommend it highly enough.” —André Alexis, The Globe and Mail (Toronto)