Some Kind of Fairy Tale: A Suspense Thriller (Paperback) 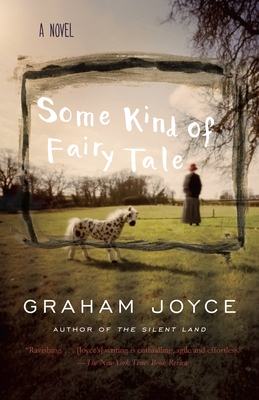 “Twenty years ago, 15-year-old Tara Martin disappeared without a trace, until one Christmas morning when she appears out of the blue looking as though she were still a teenager and calming she was lured away by 'the fairies.' A mysterious and unknown figure with deep insight and untold answers serves as narrator, and readers are kept on edge as they try to answer the question: Where has Tara been? A mind-bending psychological narrative filled with mystery and beautifully written prose.”
— Heath Christman, Warwick's, La Jolla, CA

Winner of the British Fantasy Award for Best Novel

Twenty years ago, teenager Tara Martin disappeared in the dense English forest known as the Outwoods, leaving her parents and her brother, Peter, to fear the unthinkable.

But on Christmas Day, the doorbell rings and there Tara stands—disheveled, unapologetic, and not looking a day over sixteen. It’s a miracle, but Peter is skeptical, especially when Tara claims that she was abducted by fairies. As those who loved and missed Tara attempt to understand where she’s been for two decades, they begin to ask the same question: Has Tara lost her sanity … or have they?

Graham Joyce, a winner of the O. Henry Award, the British Fantasy Award, and the World Fantasy Award, lives in Leicester, England, with his family. His books include The Silent Land, Smoking Poppy, Indigo (a New York Times Notable Book of 2000), The Tooth Fairy (a Publishers Weekly Best Book of 1998), and Requiem, among others.

“Here is a keenly observed tale of a family in crisis, one that mixes fantasy and psychiatry in a potent cocktail." —Stephen King, "The Best Books I Read in 2012", Entertainment Weekly

“Joyce’s fiction is an unusual—and unusually satisfying—hybrid. He’s interested in all the things that preoccupy literary novelists: finely drawn characters, the beauty and sadness of life’s inevitable transitions, families in all their ambiguous and endlessly fascinating complexity. His prose is precise and unsentimental. Yet into the fabric of these relationships he weaves elements of folklore and myth.” —Laura Miller, Salon

“One of the most impressive fantasy books we’ve read in ages.” —io9.com

“Reading Some Kind of Fairy Tale is a little like stepping into an enormous, brilliantly camouflaged mantrap…. Joyce’s books are as seductive as anything you’ll find in contemporary fiction.” —Richmond Times-Dispatch

“Joyce’s fairy tale is one of dark and dangerous collision.” —The Washington Post

“I became a rabidly devoted fan of Graham Joyce’s the first time I read his work.” —Peter Straub

“Some Kind of Fairy Tale is fantastically formed, complete with a gently portentous premise, a marvelous cast of characters, and a narrative as smart and self-reflexive as it is at first old-fashioned. Enigmatic and intellectual, yes, yet readily accessible and massively satisfying, Joyce’s latest is a joy.” —Tor.com

“One of my best reads in decades.” —L. Dean Murphy, Bookreporter

“Some Kind of Fairy Tale is all about passing through walls: between people, between truths, between worlds. But where a lesser writer might strain to keep all those layers in focus, Joyce projects a vision of the heart as rich and ethereal as the age-old tradition Fairy Tale invokes. . . . As its title trumpets, Some Kind of Fairy Tale meditates on the nature of what it means to tell stories. But wisely and hauntingly, it does so through a spellbinding story of its own.” —The Onion’s A.V. Club

“Joyce’s fiction has always displayed a certain generosity of spirit that lifts it above the ordinary. . . . Joyce as a writer is a master charmer. . . . Mesmerizing.” —The Guardian (London)

“Haunting, brilliant. . . . Some Kind of Fairytale works the same sort of magic [as The Limits of Enchantment] and in many ways is even more accomplished. This time, people, pay attention.” —Locus

“Reality and fairy tale are beautifully interwoven in this contemplative story about relationships, love, and dreams. In a unique blend of thriller and fantasy, Joyce creates a delightful page-turner that his fans and newcomers alike will find hard to put down.” —Booklist