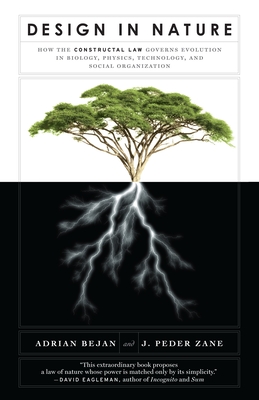 By Adrian Bejan, J. Peder Zane
$17.95
Unavailable, Out of Stock, or Out of Print

In this groundbreaking book, Adrian Bejan takes the recurring patterns in nature—trees, tributaries, air passages, neural networks, and lightning bolts—and reveals how a single principle of physics, the constructal law, accounts for the evolution of these and many other designs in our world.

Everything—from biological life to inanimate systems—generates shape and structure and evolves in a sequence of ever-improving designs in order to facilitate flow. River basins, cardiovascular systems, and bolts of lightning are very efficient flow systems to move a current—of water, blood, or electricity. Likewise, the more complex architecture of animals evolve to cover greater distance per unit of useful energy, or increase their flow across the land. Such designs also appear in human organizations, like the hierarchical “flowcharts” or reporting structures in corporations and political bodies. All are governed by the same principle, known as the constructal law, and configure and reconfigure themselves over time to flow more efficiently. Written in an easy style that achieves clarity without sacrificing complexity, Design in Nature is a paradigm-shifting book that will fundamentally transform our understanding of the world around us.

Adrian Bejan has pioneered numerous original methods in thermodynamics, such as entropy generation minimization, scale analysis of convection, heatlines and masslines, and the constructal law of design and evolution in nature. He is ranked among the hundred most cited authors in all engineering by the Institute of Scientific Information. He is the author of more than 550 peer-reviewed journal articles and twenty-four books, including Shape and Structure, from Engineering to Nature; Constructal Theory of Social Dynamics; and Design with Constructal Theory. His treatises Advanced Engineering Thermodynamics and Convection Heat Transfer are now in their third editions and are used as graduate textbooks in universities around the world. He has been awarded sixteen honorary doctorates by universities in eleven countries, including the Swiss Federal Institute of Technology and the Sapienza University of Rome and has received numerous national and international society awards. Bejan is a graduate of MIT and was a postdoctoral fellow at the University of California, Berkeley, at the Miller Institute of Basic Research in Science. He was appointed as a full professor of mechanical engineering at Duke University in 1984, and J. A. Jones Distinguished Professor in 1989.


J. Peder Zane is an assistant professor of journalism and mass communications at St. Augustine’s College in Raleigh, North Carolina. He is an award-winning columnist who has worked for the New York Times and the News & Observer (Raleigh). He has edited and contributed to two books, Remarkable Reads: 34 Writers and Their Adventures in Reading and The Top Ten: Writers Pick Their Favorite Books.

“Fascinating. . . . By reframing things as flow systems, they reveal how function determines form in everything from corporate hierarchies to Canada geese.” —Nature

“[I] found myself immediately sucked in. . . . The Constructal Law is important because it not only describes the patterns of change in the world within and around us, but it allows us to predict how the configuration of those patterns will evolve over time.” —Forbes

“Lucidly written. . . . A revolutionary, unifying vision of nature that could impact all branches of science.” —Booklist

“Presents complex ideas in an understandable context. . . . Source of food for thought. . . . . Interesting. . . . Excellent reflection on the history of science.” —Winnipeg Free Press

“Design in Nature is an elegant exposition of a unifying principle so simple that it demystifies our comprehension of the ‘low’ of the universe. An absorbing and thoughtful account of why nature is designed that way it is; Bejan engages the reader from the very first sentence to last word.” —Donald Johanson, Founding Director of the Institute of Human Origins and noted discoverer of “Lucy”

“Why do riverbeds, blood vessels, and lightning bolts all look alike? It’s not a coincidence. This extraordinary book proposes a law of nature whose power is matched only by its simplicity. Everything you lay your eyes on will blow your mind with fresh interpretation.” —David Eagleman, The New York Times bestselling author of Incognito and Sum, and Director of the Laboratory for Perception and Action at the Baylor College of Medicine

“After reading this deeply inspiring and liberating book, you will never look at the world—the whole world—the same again. It not only helps us to better understand the natural environment, but it has profound implications for how we all need to act if we want to sustain success. This perspective is not just for scientists—it helps to reframe agendas for entrepreneurs, business executives, educators, and policy makers. Go with the flow!” —John Hagel, co-author of The Power of Pull, and Co-Chairman of the Deloitte Center for the Edge

“Bejan masterfully unifies—under a deep common law—physics, chemistry, biology, and even part of the social sciences. His treatment of natural design, flow systems, and complex order as spontaneously arising from flow optimization is novel, powerful, and highly plausible.” —Massimo Piattelli-Palmarini, author of What Darwin Got Wrong, and Professor of Cognitive Science at the University of Arizona

“The most amazing thing about life is that it exists at all. The second most amazing thing about life is that living things seem to be so very good at it. In his bold new book Bejan asks why, and his answer cuts to the very core of what life is—organized flows of heat, electricity, matter, and energy. From this deceptively simple idea, Bejan takes us on an incredible expedition through life’s vast scope, from tiniest cell to organism to societies to ecosystems to the entire planet. It is a bracing journey.”  —J. Scott Turner, author of The Tinkerer’s Accomplice, and Professor of Biology at SUNY College of Environmental Science and Forestry in Syracuse

“With wide-ranging examples and the iconic pictures to go with them, Bejan illustrates that nature is inherently an outstanding designer of flow configurations, which raises philosophic issues beyond the remit of thermodynamics. Is the distinction between animate and inanimate blurred by their common constructal design? These and many more issues are raised by Bejan’s distinguished and original work, fittingly presented in Design in Nature.” —Jeffery Lewins, Deputy Praelector at Magdalene College at Cambridge University

“A most stimulating thought principle, framed in a nice and lively personal story. What I really find most exciting is the exceptionally broad perspective that Bejan adopts for developing his concepts. Design in Nature is a fascinating read.” —Ewald Weibel, Professor Emeritus of Anatomy at the University of Berne

“Thought provoking! Thermodynamics may determine where you’re going; here’s a rule that tells how you get there. And so simple—the more efficient the pathway, the more likely is its persistence, whatever the mechanism behind that persistence. This is science at its biggest and boldest.” —Steven Vogel, author of Cats’ Paws and Catapults, and James B. Duke Professor of Biology at Duke University