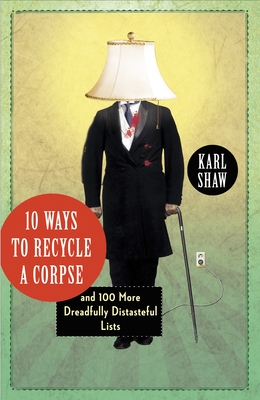 Prepare to be even more revolted, flabbergasted, appalled, and completely entertained by this incredible follow-up collection of absolutely true trivia from the author of 5 People Who Died During Sex. Nothing is too insane, too inane, or too sacred for Karl Shaw’s eclectic lists of the world’s very worst.

DID YOU KNOW…
…that according to recent estimates (2010) your body is worth between $10,000-$100,000 on today’s open market—from companies legitimately trading body parts from willing donors to recognized medical facilities?

…that the great plague of Athens in 404, which lead to the defeat of the Athenians in the Peloponnesian War, was probably caused by contaminated cereals?

…that Benjamin Franklin liked to sit stark naked in front of his open windows, calling the practice “taking an air bath”?

…that in the last days of his life, the actor Steve McQueen lived on a diet largely comprised of boiled alligator skin and apricot pits, washed down with urine?

Karl Shaw wrote and illustrated for UK newspapers and magazines for several years before working in advertising and marketing. He now lives in Staffordshire, England, where he has channelled a misdirected education into several books including Royal Babylon: The Alarming History Of European Royalty, 5 People Who Died During Sex, Curing Hiccups With Small Fires: A Miscellany of Great British Eccentrics and 10 Ways To Recycle A Corpse.