The Brother Gardeners: A Generation of Gentlemen Naturalists and the Birth of an Obsession (Paperback) 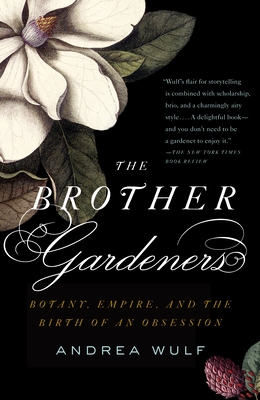 From the bestselling author of The Invention of Nature, a fascinating look at the men who made Britain the center of the botanical world.

“Wulf’s flair for storytelling is combined with scholarship, brio, and a charmingly airy style. ... A delightful book—and you don’t need to be a gardener to enjoy it.”—The New York Times Book Review

Bringing to life the science and adventure of eighteenth-century plant collecting, The Brother Gardeners is the story of how six men created the modern garden and changed the horticultural world in the process. It is a story of a garden revolution that began in America.

In 1733, colonial farmer John Bartram shipped two boxes of precious American plants and seeds to Peter Collinson in London. Around these men formed the nucleus of a botany movement, which included famous Swedish botanist Carl Linnaeus; Philip Miller, bestselling author of The Gardeners Dictionary; and Joseph Banks and David Solander, two botanist explorers, who scoured the globe for plant life aboard Captain Cook’s Endeavor. As they cultivated exotic blooms from around the world, they helped make Britain an epicenter of horticultural and botanical expertise. The Brother Gardeners paints a vivid portrait of an emerging world of knowledge and gardening as we know it today.

Andrea Wulf was born in India and moved to Germany as a child. She trained as a design historian at London’s Royal College of Art .  She is also the author of The Invention of Nature: Alexander Von Humboldt's New World and Founding Gardeners: The Revolutionary Generation, Nature, and the Shaping of the American Nation and is coauthor (with Emma Gieben-Gamal) of This Other Eden: Seven Great Gardens and 300 Years of English History. She has written for The Sunday Times (London), the Wall Street Journal and The Financial Times, and she reviews for numerous newspapers, including The Guardian, The Times Literary Supplement, and The Mail on Sunday. She appears regularly on BBC television and radio. The Brothers Gardeners was longlisted for the Samuel Johnson Prize in 2008.

“Wulf’s flair for storytelling is combined with scholarship, brio, and a charmingly airy style. . . . A delightful book—and you don’t need to be a gardener to enjoy it.”—The New York Times Book Review

“A lively account . . . renders with clarity and grace a significant chapter in horticultural history . . . Elegant, humorous and accessible. . . A erudite, pleasurable and handsome book."—Richmond Times Dispatch

“Vigorous … powerful …Wulf draws the threads of her story compellingly together and lights up an “American connection” in Georgian garden growth as never before.”—The Financial Times

“Engaging. . . . Lavishly researched. . . . Wulf never allows her material to overwhelm a vivid sense of the big picture, which keenly informs her sparkling narrative.”—Bookforum

“As Wulf triumphantly shows, plants and gardens reveal a wider view of the forces that shape society ... rarely has the story of English plants been told with such vigour, and such fun.” —Times Literary Supplement, London

“The best book this year is The Brother Gardeners: Botany, Empire and the Birth of an Obsession” —Independent on Sunday, London

"The Brother Gardeners is an excellent, hugely entertaining and instructive tale, and Wulf tells it well." —The Guardian, London

“This absorbing and delightful book about 18th-century botanists stands out among histories of plant hunting ... The approach works superbly because Andrea Wulf makes us see her subjects so vividly … Wulf is admirably clear about the botanical discoveries (amplified by a fascinating glossary of plants, detailing their discovery and introduction).” —Sunday Telegraph, London

"'The Brother Gardeners' by Andrea Wulf is a beguiling tale ... this tale of many surprises"—Free-Lance Star

“Engrossing new book … The American seeds and plants thrived in the English soil and climate, and a national obsession was born. Origins and ironies aside, we are all the richer for it, and for Wulf's book, too.” —Hartford Courant

“A delightful look at horticultural history.” —Scotland on Sunday

“An eminently readable narrative. . . . Like a well-kept garden, The Brother Gardeners is a delight.”—Providence Journal