When God Talks Back: Understanding the American Evangelical Relationship with God (Hardcover) 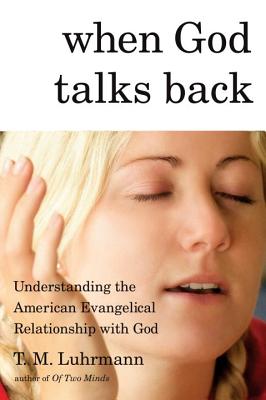 By T. M. Luhrmann
This Book Is Not Sold Online - Inquire In Store
Hard to Find

How does God become and remain real for modern evangelicals? How are rational, sensible people of faith able to experience the presence of a powerful yet invisible being and sustain that belief in an environment of overwhelming skepticism? T. M. Luhrmann, an anthropologist trained in psychology and the acclaimed author of "Of Two Minds, "explores the extraordinary process that leads some believers to a place where God is profoundly real and his voice can be heard amid the clutter of everyday thoughts.
While attending services and various small group meetings at her local branch of the Vineyard, an evangelical church with hundreds of congregations across the country, Luhrmann sought to understand how some members were able to communicate with God, not just through one-sided prayers but with discernable feedback. Some saw visions, while others claimed to hear the voice of God himself. For these congregants and many other Christians, God was intensely alive. After holding a series of honest, personal interviews with Vineyard members who claimed to have had isolated or ongoing supernatural experiences with God, Luhrmann hypothesized that the practice of prayer could train a person to hear God's voice to use one's mind differently and focus on God's voice until it became clear. A subsequent experiment conducted between people who were and weren t practiced in prayer further illuminated her conclusion. For those who have trained themselves to concentrate on their inner experiences, God is experienced in the brain as an actual social relationship: his voice was identified, and that identification was trusted and regarded as real and interactive.
Astute, deeply intelligent, and sensitive, "When God Talks Back" is a remarkable approach to the intersection of religion, psychology, and science, and the effect it has on the daily practices of the faithful.

TANYA LUHRMANN is a psychological anthropologist and a professor in the Department of Anthropology at Stanford University. She received her education from Harvard and Cambridge universities, and was elected as a fellow of the American Academy of Arts and Sciences in 2003. In 2007, she was awarded a Guggenheim Fellowship.

“Tanya Luhrmann is a very sensitive participant-observer and a beautiful writer, with a deep background in her subject, and her exploration of evangelical religion in America is at once empathetic and objective, as all good anthropology must be. When God Talks Back is one of the most provocative and enlightening books I have read this year.” —Oliver Sacks

"When God Talks Back is remarkable for combining creative psychological analysis with a commitment to understanding evangelicals not merely as scholarly specimens, but on their own terms. The result is the most insightful study of evangelical religion in many years." —The New York Times Book Review

"Luhrmann is a well-qualified guide: an anthropologist specializing in esoteric faiths . . . She has addressed a subject that most other people would never touch. We should thank her."  —The New Yorker

"A refreshing approach to this polarizing subject . . . [a] scholarly but deeply personal investigation." —The Cleveland Plain Dealer

"The basic theme of the book is that one comes to know God in a learning process . . . an insightful, sensitive, and compassionate study." —The New York Journal of Books

"Fascinating . . . On the merits of its sharp analysis alone, When God Talks Back deserves the highest praise . . . This book is here to stay, and every scholar, church leader, and pudit who cares about American evangelical culture is the better for it. It will reshape the study of American spirituality for years to come." —Books & Culture

"It's the William James study of our time." —Religion News

"Every so often, a truly great book comes along . . . When God Talks Back is certainly one of these." —The Huffington Post

"Luhrmann's goal is ambitious, even audacious . . . An industrious undertaking [that] produced fascinating results . . . We can thank Luhrmann for for describing evangelicalism as it has always been: a potent means for awakening a personal sense of the reality, power and mercy of God." —San Francisco Chronicle

"A simultaneously scholarly and deeply personal analysis of evangelical communities in America . . . [When God Talks Back] is an erudite discussion both profoundly sympathetic and richly analytical." —Kirkus (starred review)

"Resistant to the scornful stereotypes of the New Atheists, evangelicals who shared their spiritual lives with [Luhrmann] come across as complex men and women whose faith reflects intense emotional and mental commitment . . . In this sympathetic yet probing analysis, the evangelical spiritual dialogue with the deity emerges as the consequence of a surprisingly self-conscious strategy for finding meaning in a whirlwind of postmodern uncertainty. Much here for curious skeptics to ponder." —Booklist (starred review)

“Yet again T. M. Luhrmann investigates a puzzling phenomenon and illuminates it brilliantly. Whether you are a determined rationalist or a dedicated evangelical, you’ll be enlightened by Luhrmann’s synthesis—a worthy successor to William James’s The Varieties of Religious Experience.” —Howard Gardner, Hobbs Professor of Cognition and Education, Harvard University

“T. M. Luhrmann’s gift is the ability to observe and report with the eyes of both an anthropologist and a novelist.  This alchemy is so evident as she makes this most extraordinary narrative exploration of faith and its manifestations in everyday American life. A lovely book and a wonderful read.”  —Abraham Verghese, author of Cutting for Stone

Prayer is not an aberration. As part of the daily life of literally billions of people, it must be regarded as well within the normal repertory of human behaviors. Yet anthropology—ready enough to discourse about religion—has never managed a thick description of prayer. This is the ground that T. M. Luhrmann breaks with a deeply engrossing, first-ever, thick anthropological description of prayer in two American evangelical congregations.  A remarkable intellectual venture. —Jack Miles, Pulitzer Prize-winning author of God: A Biography
“What if nonbelievers could understand how people come to experience God? What if believers could come to understand just how difficult the process of coming to experience God is for all of us, here at the end of modernity?  When God Talks Back is a chance for our divided nation to stop talking past each other about our national preoccupation: God.” —Ken Wilson, senior pastor of Vineyard Church of Ann Arbor and author of Mystically Wired: Exploring New Realms in Prayer

“Not since Robert Bellah’s Habits of the Heart a quarter century ago has there been so readable, so informing, so scholarly, and yet so winsome a report about any group of American believers as Luhrmann’s When God Talks Back. This is religion writing at its best—a masterful examination that is a candid, humble, clear-eyed, and affirming record of what faith looks like and how it operates.” —Phyllis Tickle, author of The Great Emergence and founding editor of Publishers Weekly’s Religion Department

“Rarely have I encountered a book that succeeds so admirably in exploring the interior lives of America's evangelicals. What makes this book so remarkable is not only the author's exhaustive and empathetic fieldwork but that her conclusions emerge from a deep understanding of the history of evangelicalism.” —Randall Balmer, author of The Making of Evangelicalism

“How can one live a life at once wholly modern and fully engaged with the supernatural realm?  Many books aim to explain how American evangelicals pull this off, but this is the one that will actually change the way you think about religion going forward.  Writing elegantly and sympathetically about evangelical lives while at the same time developing a profound theory of the learning processes by which human beings come to inhabit religious worlds, Lurhmann has produced the book all of us – believers and nonbelievers alike - need to put our debates about religion and contemporary society on a truly productive footing.  People will be learning from When God Talks Back for a very long time to come.” —Joel Robbins, Professor of Anthropology, University of California, San Diego

"This amazing book provides a compelling account of how evangelical Christians come to experience God as intimately and lovingly present in their lives. Drawing on two years of field work, supplemented by extensive knowledge of evangelical literature and innovative scientific field experiments, Luhrmann's demonstration of the role of both training and individual abilities in the shaping of religious experience breaks important new ground in the cognitive science of religion." —Ann Taves, author of Religious Experience Reconsidered