A Hard Kick in the Nuts: What I’ve Learned from a Lifetime of Terrible Decisions (Hardcover) 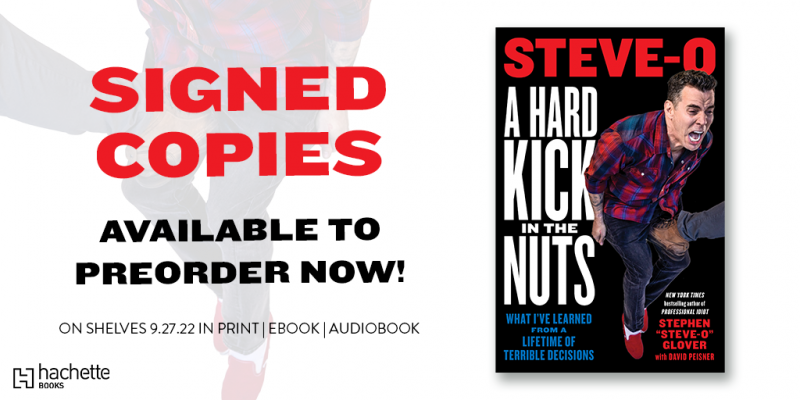 Books Inc. will ship-out all pre-order books the week of publication, September 27th! 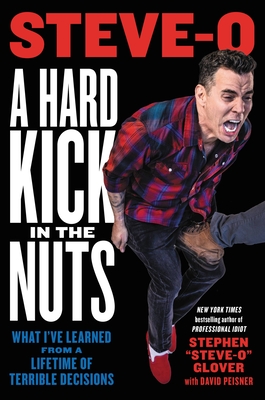 Stephen "Steve-O" Glover—social media icon, comedy-touring stalwart, and star of Jackass—delivers a hilarious and practical guide to recovery, relationships, career, and how to keep thriving long after you should be dead.

Steve-O is best known for his wildly dangerous, foolish, painful, embarrassing, and sometimes death-defying stunts. At age 48, however, he faces his greatest challenge yet: getting older. A Hard Kick in the Nuts: What I’ve Learned from a Lifetime of Terrible Decisions is a captivating exploration of life and how to live it by an individual who has already lived way more than a lifetime’s worth of extreme experiences. Steve-O grapples with the right balance between maturity and staying true to yourself, not repeating your “greatest hits,” maintaining sobriety and a healthy regimen, avoiding selfishness, and finding the right partner for life.

Having built a gargantuan and loyal social media following while establishing a successful stand-up career—all after a couple of decades of dubious behavior—Steve-O is proof that anyone can find meaning and fulfillment in life, no matter what path they choose. Packed with self-deprecating wit and gruelingly earned wisdom, A Hard Kick in the Nuts will reverberate with readers everywhere who have lived a lot (sometimes too much) and are now wondering how to approach the years to come. Or maybe just need some good motivation to get out of bed tomorrow. One of many tips: Be your own harshest critic, then cut yourself a break, and enjoy this book.

Stephen “Steve-O” Glover is a comedian and the longtime star of the legendary Jackass franchise. He regularly performs stand-up for packed houses throughout the country and he recently released his comedy special, Gnarly, direct to his fans. Steve-O also hosts the weekly podcast Steve-O’s Wild Ride! He lives in Los Angeles.

David Peisner is a freelance journalist based in Decatur, Georgia. His work has appeared in The New York Times, Rolling Stone, New York, Bloomberg Businessweek,Fast Company, Esquire, BuzzFeed, and Playboy. He is also the author of Homey Don’t Play That!: The Story of In Living Color and the Black Comedy Revolution.

"It's mind-blowing to me how utterly far gone Steve-O was, and how he looks back on it in this book with such intelligence, humor, and searing honesty. What a truly unbelievable life."—Johnny Knoxville

"A great book to read before you get on the roller coaster to hell, if you plan on surviving to tell about it like Steve-O did."—Nikki Sixx, author of The Heroin Diaries

"This is the perfect book for people who hate reading."—Tommy Lee, author of Tommyland